This thriller attempts to say something about justice, but it's completely lawless—and shamelessly crass and blatantly stupid.
Josh Hurst|October 16, 2009
Our Rating

Can you imagine a major Hollywood studio releasing a movie that is blatantly, unashamedly pro-terrorism? Of course not; for obvious reasons, terrorism is not something that any rational person would ever condone, and to make a movie that supports it would be, if nothing else, financial suicide. But that's essentially what we have with Law Abiding Citizen. It may not put a smiley face on the Taliban, yet its plot centers around a violent genius who brutally kills innocent people as a way of enacting revenge on a government with which he has grievances. And though it's not entirely clear, I think the movie actually wants us to sympathize with the guy.

Or at least, it doesn't allow us to be totally repulsed by him. The character in question is Clyde Shelton (Gerard Butler), a tinkerer whose few minor inventions have earned him a fair amount of money. The film opens with a brief moment of tenderness, between him and his daughter, before spiraling into a relentless onslaught of cruelty: A pair of invaders break into his house and brutally rape and kill his wife before murdering the child. Clyde looks on, helpless, and is, for some reason, left alive.

We see the pain written on his face, but his case is not so airtight in the eyes of the district attorney's office. His lawyer, Nick (Jamie Foxx), suspects that it will be impossible to convict both men, and that it's likely for both to walk free. So he makes a deal for one of the criminals to go free while the other goes to Death Row—in his eyes, the closest thing to justice that Clyde will get.

Then we fast forward ten years. Both criminals are still alive, and Clyde has spent the decade constructing an implausibly elaborate, completely absurd revenge plot, which goes something ... 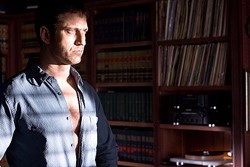