Hoop Dreams, one of my favorite documentaries, created quite a stir when it released in 1994. The film features two high school basketball players who hope to make it to the NBA and follows them through a series of highs and lows. It's remarkable for its scope—spanning five years—and its intimate perspective into these young men and their families. When it was shut out of the Best Feature Documentary category at the Oscars, people raised a fuss. (Since when do people care about documentaries?) And in 2007, the International Documentary Association named Hoop Dreams as the greatest documentary film in history.

The new documentary More Than a Game is a cousin to Hoop Dreams. It tells the story of NBA superstar LeBron James's high school basketball team in Akron, Ohio, and their quest to win a national championship. The film's six main characters are: LeBron; teammates Dru Joyce III, Sian Cotton, Willie McGee, and Romeo Travis; and their coach, Dru Joyce II. (Read our interview with Coach Joyce here.)

As in Hoop Dreams, the narrative of More Than Game spans several years. Also, in both films the main characters share a goal, and the players' off-the-court stories add weight to their on-the-court successes and failures. Furthermore, both started out as smaller projects that grew into feature-length films. Hoop Dreams was meant to be a 30-minute PBS feature, and More Than a Game was originally just a 10-minute class project for then-college student Kristopher Belman.

But while the style of Hoop Dreams reflects its PBS origins, More Than a Game feels more like a child of ESPN. The editing is faster, rap music enlivens the in-game highlights, and the story arc is neater and tidier. There's also a guy named LeBron who ... 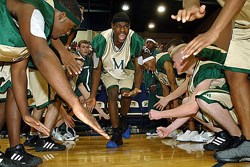