The follow up to Paris, je t'aime explores the same ideas in a slightly rearranged package and an entirely new town: New York City.
Alissa Wilkinson|October 16, 2009
Our Rating

New York is often in the movies, and nearly as often is described as a "character" in those movies. Manhattan's skyline boasts instant recognition. The mythology of the place is barely larger than its reality.

The thing about this aura is that if you believe the movies, New York City's boundaries extend roughly from Houston Street to the lower half of Central Park, from Eighth Avenue to Second Avenue. If you believe most New York movies, then all New Yorkers are hardened gangsters, hopelessly quirky artists, or young, gorgeous professionals with bottomless bank accounts and curiously enormous amounts of free time. Boroughs? Old people? Families? Not here.

Of course, that's not what the city is like at all. Cities, by nature, defy easy characterization. New York has children, old people, poor people, workaholics, and the rest, just like every other place. New York is more than Manhattan. And cities are more than their on-screen incarnations.

That's why the project to which New York, I Love You and its predecessor Paris, je t'aime belong is so appropriate. NYILY is the second in a series of films about love and cities around the world. The Paris installment was a collection of five-minute films named after the city's arrondissements that explored the concept of love—romance, families, imaginary, mythological, or love for the city itself.

This new Big Apple-based project reinvents the concept for a new city. Appropriately, this one is bigger and faster than its predecessor, with a harder edge. Its segments weave together; characters from earlier stories occasionally meander into another story. Everyone is connected, loosely or more permanently—and sometimes in surprising ways.

This format evokes the spirit of a diverse ... 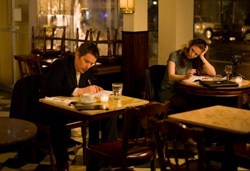