Combining elements of a documentary and a concert film, this movie proves that Michael Jackson was more than ready for a spellbinding comeback.
Russ Breimeier|October 28, 2009
Our Rating

It's neither insightful enough to be a full documentary, nor is it complete enough for a full concert film, but Michael Jackson's This Is It offers a unique film experience that will divide many filmgoers into two camps.

The non-fan has absolutely no reason to see this—not even morbid curiosity. There are no major revelations into Jackson's life or the sordid details of his shocking death on June 25, 2009. It's purely a celebration of the mega-star's musical legacy.

But the Jackson fan has every reason to see it. Jackson had been rehearsing at the Los Angeles Staples Center since April 2009, preparing for 50 sold-out shows in London that would have surely led to a worldwide farewell tour. Now it's the tour that will never be, making this bittersweet project a glimpse of what might have been by distilling over a hundred hours of rehearsal footage (intended for DVD featurettes) into a two-hour film.

Andy Argyrakis, who writes for Christian Music Today, is one such fan, all his life aching to see the King of Pop in concert and lucky enough to score a ticket for one of the London shows. After screening This Is It with me, his response was pure ecstasy: "It absolutely gives you a front row seat to what you would have seen at the concert, proving MJ would have finished on top with his legacy intact." I'll leave out his more hyperbolic comments about this becoming the biggest film of all time, but fans should hurry and get tickets for the limited two-week theatrical release, though popular demand will likely extend it.

What about those with a mixture of admiration for the entertainer and disapproval for his eccentricities? This Is It surpassed my expectations, and reaffirmed Jackson's showmanship through a developing concert ... 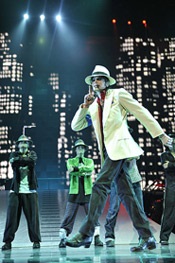