In her first role since Juno, Ellen Page shuns the path of beauty pageants and tries out her grrrrrl power in quite a different arena instead: Roller derby.
Lisa Ann Cockrel|October 2, 2009
Our Rating

Whip It does not have an exclamation point in its title, but this mistake—made by more than a few blogs, interviews, and reviews—is understandable. Drew Barrymore's directorial debut is such an energetic celebration of grrrl power that it seems the spirited punctuation should be a given.

Featuring Ellen Page in her first post-Juno role (Smart People was filmed before her career-making turn as the eponymous pregnant teen), Whip It tells the story of Bliss Cavendar, a bored Texas teen on the beauty pageant circuit who discovers roller derby and kick-starts her life. What is it about eight wheels and some kneepads that brings out the inner bodaciousness in even the most meek girl? It's unclear, but it sure is fun to watch.

For the uninitiated, the current incarnation of roller derby (a term that dates back to 1922) comes out of a revival of the sport, a restart that got rolling in Austin, Texas in 2000. The mostly female athletes strap on skates and whiz around tracks (some flat, some banked) in competitions called bouts. Teams score points when their appointed "jammer" successfully laps and then passes a member of the opposite team.  Roller derby is a full-contact sport and all manner of shenanigans are employed to keep the jammers from passing skaters. While Whip It amps things up a bit for the cameras, bruises and bloody noses are par for the course. (Think of it as championship wrestling … for women … on wheels.)

Also par for the course is the campy theater of roller derby. Protective gear is worn along with fishnet stockings, bloomers, pigtails, ribbons, pleated skirts, and whatever else strikes the whimsy of the skaters. The culture of roller derby is steeped in third-wave feminism and a punk rock-do-it-yourself ... 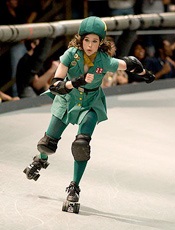