Over the course of a half dozen albums, soulful folk singer Patty Griffin has won an impeccable reputation as an insightful songwriter and passionate vocal performer, and her songs have been covered by artists as diverse as The Dixie Chicks, Solomon Burke, and Bette Midler. But the last few years have seen Griffin expand on an already revered body of work. Her 2007 album Children Running Through revealed a previously unexplored focus on gospel music, and on songs such as "Heavenly Day" and "Up to the Mountain (MLK Song)" she added her own voice and words to the timeless gospel tradition. And in early 2009, she collaborated with R&B/gospel legend Mavis Staples on the gospel chestnut "Waiting for My Child to Come Home," one of the cornerstones of the critically lauded Oh Happy Day compilation.

Griffin's latest album, the just released Downtown Church, represents her most immersive foray yet into the genre. Mixing country and bluegrass hymns, obscure and classic spirituals from the black gospel tradition, Hispanic hymns, a 13th century praisefest from St. Francis of Assisi, and a couple gospel originals, Griffin shows off the breadth of this remarkable music, and reminds us again that "gospel" is a musical tradition that crosses cultures and centuries. CT spoke with Griffin about her new album.

Can you share a little bit about how this gospel album came about? What started the process?

A little over a year ago I was asked to sing with Mavis Staples on a gospel compilation called Oh Happy Day. And, you know, other than being totally intimidated at the prospect of singing with Mavis, I was honored. I don't really have much of a background in gospel music. Other than some Staple Singers albums, and Aretha Franklin's Amazing Grace ...

Join in on Facebook
Tags:
None
Posted:
January 26, 2010
More From: Andy Whitman 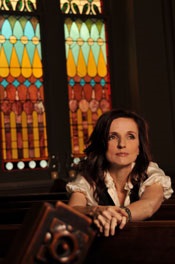