This romantic drama set against the sailing culture of the Pacific Northwest has a supernatural twist. And yes, Zac Efron can act.
Lisa Ann Cockrel|July 30, 2010
Our Rating

Last winter, 16-year-old Abby Sunderland set out from California on a mission to be the youngest sailor to circumnavigate the world solo. But by early June, Abby was in trouble in the southern Indian Ocean and she had to be rescued from her ailing 40-foot sailboat Wild Eyes. The dramatic series of events was all over the news as Abby's family waited with intense concern and then relief after Abby sent a distress signal. It was impossible not to have Abby's story in mind while watching Charlie St. Cloud, a romantic drama with a supernatural twist that is set against the sailing culture of the Pacific Northwest.

Abby's troubles provided inadvertent foreshadowing for this big screen adaptation of Ben Sherwood's popular novel The Death and Life of Charlie St. Cloud, which plays like a movie mash-up of The Notebook and The Sixth Sense. With the beautiful backdrop of churning sea and forested land playing its own supporting role, the movie tells the story of Charlie (Zac Efron), a gifted sailor with a scholarship to Stanford when a tragic accident changes everything. His beloved, though sometimes neglected, younger brother Sam (Charlie Tahan) dies in a car wreck in which Charlie was driving; Charlie also flatlines before being shocked back to life.

Well, shocked back to consciousness might be a better way to put it. A friend later tells Charlie in exasperation, "You didn't die in that accident," only to have him reply, "Yes, I did." And indeed, Charlie, paralyzed by guilt, forgoes his college scholarship to Stanford to become the caretaker at the cemetery where Sam is buried, creating an insular existence for himself. He made a pact with Sam never to leave him alone again and he fulfills it with his work at the cemetery and also ... 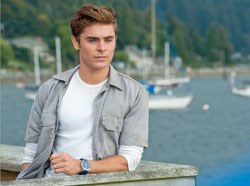