Lynda Randle may be best known as the only African-American in the Gaither family of musicians, but her biggest passion is ministering to hurting women.
Mark Moring| May 25, 2010

Lynda Randle knows what it's like to be pulled in a million different directions. She's a relatively successful solo artist, but is most well-known as a regular performer—and the only African-American—in the Gaither Homecoming tours and products. She is the founder of Lynda Randle Ministries in Kansas City, through which she encourages women and aims to build bridges between races. She and her husband, Mike, aim to plant a new church in KC that will bring together a multicultural congregation. She is the older sister of Michael Tait, former member of dc Talk and now the lead singer for the Newsboys. Finally, Randle is A Woman After God's Own Heart, the title of her new CD (releasing today) and of the women's conferences she stages 2-3 times per year (most recent was held last weekend in Minnesota). We recently caught up with Randle to discuss her new album, and more.

A Woman after God's Own Heart is the title of your conferences and your new CD. Tell me what that phrase means to you.

Lynda Randle: It's from David's story in the Bible. After all of his sins, all of the mistakes David made, God said, "He is still a man after my own heart." God's desires for the heart of his children is to be toward him. In my own life, I've blown it many times, but I want to be a woman after God's own heart. And there's security in knowing that God loves us unconditionally.

Is that the theme on the album and at your conferences?

Randle: Absolutely. Cee Cee Michaela is speaking again this year [the conference was held in May in Minnesota]. She has an incredible story of secondary virginity and purity, and on what it means to be a woman of God. I think at the end of the day, the women go back feeling that they are loved and appreciated. ... 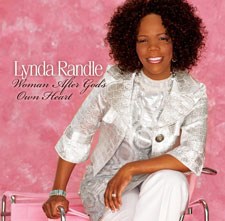