With production well underway, the team behind the Blue Like Jazz movie is humbled and fueled by gratitude for those who funded the film.
Andrea Lucado; photos by Jimmy Abegg|November 30, 2010

NASHVILLE—Airs and pretense could not budge their way into the cramped quarters on the movie set of Blue Like Jazz if they tried. They couldn't get past all the passion, excitement, eagerness, and humility by those making the film, nor could they fit for the literal lack of space in this particular scene's locale: a little retail shop on a small corner in Nashville, Tennessee.

Everyone—actors, producers, directors, assistants, and tech crew—has crammed into the store for an evening of shooting what will ultimately be an eight-second portion of a montage that depicts Donald Miller's character adjusting to college life. These eight seconds include Don, played by True Blood's Marshall Allman, trying on new "hip" clothes tossed to him by his friend Lauryn, played by Lost's Tania Raymonde.

Despite the sewing machines, large craft tables, racks of clothes, stacks of folded jeans, and a couple of roaming dogs to work around, the crew maneuvers its equipment among the obstacles, and no one complains of the limited space that necessitates should-to-shoulder contact.

"You just can't buy that kind of camaraderie," says Miller, author of Blue Like Jazz and co-screenwriter of the film, tentatively scheduled to release in the fall of 2011. Miller planned to be on set as much as possible during the four weeks of filming in Nashville—they wrapped this weekend—and again early next year for three days of filming in Portland, Miller's hometown and the locale for much of his true-life story.

Reflecting on the people who are making this "miracle film"—more on that in a moment—Miller says, "A lot of times you can shoot an [independent] movie and people are just going, 'I wonder if we're shooting anything ... 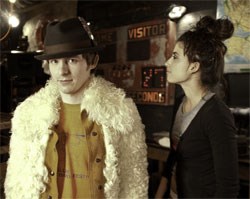