Despite an entertaining finale, Paul Haggis' latest asks us to leave logic and morals at the door.
David Roark|November 19, 2010
Our Rating

At the center of Paul Haggis' The Next Three Days, a remake of the 2008 French film Anything for Her, is a moral dilemma. When community college English teacher John Brennan's wife is wrongfully accused of murder, he must decide whether to exceed the law and break her out of prison, or to let injustice prevail. But when he chooses the former and people start dying and human life is devalued, the audience is put in a similar predicament: We are forced to either cheer the protagonist on despite his tainted ethics, or play against the storyline for the sake of what is right. Haggis provides no commentary—nor consequences for John—and muddles morality for the sake of a thrilling story.

The pretentious filmmaker seems more concerned with love than ethics. He wants to portray the powerful bond between husband and wife and, in turn, the extremes to which such love can drive a man. But Haggis fails to make the relationship between John (Russell Crowe) and his wife, Lara (Elizabeth Banks), convincing. Instead of taking time to develop their romance, he opens his film on the night that Lara allegedly kills her boss and wastes the next hour following John as he develops his plan to free Lara, spending too much time on tiresome details. There are very few moments in which we see or feel their unreserved love. Thus, it's difficult to believe John would become a criminal—a killer even—and risk everything, including his young son, because of it.

Early in the film, during a lecture on Don Quixote, John tells his students that "rational thought destroys the soul." It's supposed to speak to John's circumstances, as he is driven to irrationality by his love for Lara. Instead, it further exhibits Haggis' failure to dramatize ... 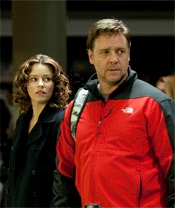