Denzel Washington and Chris Pine versus runaway train. That's enough, isn't it? How much more do you need?

The good guys aren't cops, soldiers or superheroes, just working-class Americans (although cops and at least one Marine fresh from Afghanistan are among the supporting characters). There are no guns or bombs, no kidnapped heroine or taunting bad guy (although a supercilious, profit-minded executive in a distant office stands in for a villain)—just thousands of tons of iron, fuel and combustible toxic chemicals barreling like a rocket through industrial Pennsylvania. Obstacles include railroad crossings, hairpin turns, and oncoming passenger trains.

None of the characters in Unstoppable is having a good day. Frank Barnes (Denzel Washington), a 28-year veteran engineer, has forgotten to call one of his daughters on her birthday, and now she isn't talking to him. Will Colson (Star Trek's Pine), a greenhorn conductor with political connections, gets grief from hostile blue-collar coworkers. Convention dictates that both protagonists have personal troubles that aren't clear right away.

In another train yard, yardmaster Connie Hooper (Rosario Dawson) has a growing headache on her hands. A disaffected yard worker—the sort of schmoe who seems to resent his job as an imposition on his free time—has cut corners and made mistakes while relocating a train, and something has gone wrong. It's the sort of thing that would usually amount to a close call, a near miss—but every once in a while near misses don't miss.

At first Connie thinks she has only a "coaster" on her hands—an unmanned runaway train rolling along on inertia, easily dealt with. But then it emerges that the train is under power … and ... 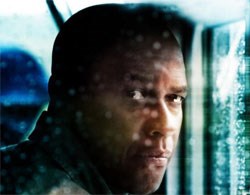