A charming, surprisingly life-affirming peek at a depressed teen's stay in a psych ward.
Camerin Courtney|October 8, 2010
Our Rating

The movie starts on a bridge—both literally and figuratively. In the opening scene, distressed 16-year-old Craig (Keir Gilchrist) climbs out on a bridge. Filled with teenage angst inside and facing a crazy, messed-up world outside, Craig is overwhelmed and tempted to end it all.

When he wakes up and realizes he's just had another suicide-themed dream, and that they're getting more vivid, he also realizes he's teetering on a bridge between sanity and craziness. Afraid he's headed in a dangerous direction, he climbs out of bed without waking his parents or younger sister and bikes himself to the nearest hospital in his Brooklyn neighborhood.

After explaining to the attending physician his stress over his demanding pre-professional magnet school, his crush on his best friend's girlfriend, his forthcoming application to a prestigious summer program, his over-busy father and overwrought mother, his tendency to puke when stressed, not to mention global warming and the economy—as well as his suicide dreams and the fact that he recently took himself off Zoloft—Craig gets himself checked into the psych ward.

Since the teen wing is under renovation, Craig is put in with the adults for his five-day minimum stay. He's soon introduced to Bobby (Zach Galifianakis), the gregarious man-child who shows him around 3 North (the adult wing) and introduces him to the amenities (the art room, the rec room) and the locals (the doped-out, the delusional, and the delightful Noelle, a fellow displaced teen).

At first Craig is even more stressed—he was hoping for a quick cure that wouldn't keep him out of school for so long. And he's a bit freaked out by all the people who are dealing with more serious issues, like his mumbling, ... 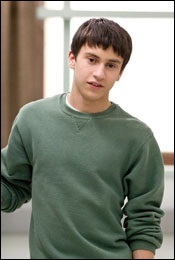