'Braveheart' writer Randall Wallace brings his faith into his work as a filmmaker, and now again as director of 'Secretariat,' opening this week.
Mark Moring|October 5, 2010

When Randall Wallace first met Mel Gibson, he was pitching a script for a movie about a 14th century Scottish hero most of us had never heard of: William Wallace. (And no, Randall isn't related to him.)

Gibson listened as Wallace became more and more animated, till he was pounding on the table and saying things like, "If you are faithful to your heart, even if they cut it out of you, you prevail" and "If you don't want to make that story, you should go somewhere else." Gibson wanted to make that story, and the rest is Braveheart history.

It was a long way from Durham, North Carolina, and Duke Divinity School, where, more than 20 years before, Wallace was studying theology and considering becoming a pastor—till his own minister urged him to consider his true calling. That ultimately turned out to be Hollywood and making movies—first as a writer and later as a director.

Wallace was nominated for an Oscar (and won the Writers Guild of America award) for his Braveheart screenplay in 1995. He went on to write scripts for The Man in the Iron Mask, Pearl Harbor, and We Were Soldiers, the last of which he also directed—and which starred Mel Gibson in the lead role.

Next up for Wallace is Secretariat, opening in theaters this week. Yes, it's the story of the great race horse who won the 1973 Triple Crown, but moreso, it's the story of owner Penny Chenery, who overcame hardship, bucked the odds—and doubts and criticisms in a male-dominated sport—and practically willed the horse to victory. It all adds up to an inspiring, family-friendly film that includes, hands-down, the best horse racing footage ever seen on the big screen (including Seabiscuit).

We recently sat down with Wallace to talk about Secretariat, ... 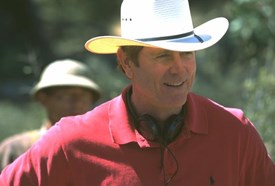