Director John Curran made two perhaps inadvertently telling comments to the Toronto Film Festival audience last month following a screening of Stone. He said when Edward Norton first read the script, he passed on playing the title character because he (Norton) "just didn't see it." Later, after Robert De Niro agreed to play the title role, Norton reconsidered. Also, Curran mentioned that the film's near constant use of Christian talk-back radio as part of the soundtrack was a late addition because the director felt that De Niro is a very closed actor who didn't reveal much about his character's internal mental or emotional landscape, and Curran couldn't find music that would cue the audience into what Jack (De Niro's character) was thinking and feeling.

The line between subtle and muddled is a particularly thin one, and the film's defenders might think I'm on the wrong side of it. C. S. Lewis once opined that rhetorical nonsense doesn't become sense just by inserting the word "God" into a sentence. Likewise, just because Stone is asking questions that are essentially "religious" doesn't necessarily transform a muddled movie into something insightful. Sometimes it just results in muddled ideas about spiritual subjects.

De Niro plays Jack Mabry, a parole instructor on the verge of retirement who once responded to his wife's threat to leave him by responding with a threat of his own—he'd kill their child if she ever tried to leave, or ever mention it again. It's unclear whether Curran intended to portray Jack as a Christian, though he's certainly shown as a church attender. If Christian faith is central to Jack's character, it's not evident in the film.

Norton plays Gerald "Stone" Creeson, one of the last inmates for whom ... 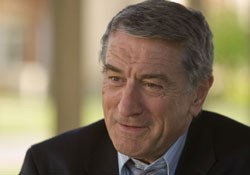