Hildegard von Bingen was a Benedictine nun, a musician, and a student of the natural world conversant in the medicinal qualities of plants and the scientific causes of astronomical phenomena. A renaissance woman before there was a Renaissance, recognized by Pope Eugene III as a true seer, Hildegard founded two convents in her life. She often conflicted with the patriarchal structure of the Roman Catholic Church, and was even denied communion for several years late in her life for defying a church order.

Fascinating lives usually make for fascinating films, but not always. In the case of Margarethe von Trotta's Vision: From the Life of Hildegard von Bingen, the sheer amount of interesting material often appears to pull the story in different directions. Carefully researched and shot in surviving, contemporaneous buildings (primarily the Cistercian convent of Cloister Maulbronn), Vision offers a wealth of information about twelfth-century life, both in and out of the Benedictine convent. What is perhaps missing is an effective shaping of the events to give the audience a sense of the woman behind the icon.

After a brief introduction in which we learn how Hildegard comes to the convent, the film jumps forward thirty years to the death of her mentor, Jutta von Sponheim, and her ascension to a position of leadership. The suggestion of a rivalry is hinted at, but we are only told that Hildegard was a favorite of Jutta's, we never see why.

The pattern of introducing themes from Hildegard's life without allowing any of them to develop into a central theme gives the film a tentative, faltering quality. Early on, we see Hildegard witnessing various acts of self-flagellation or other forms of penitential corporal punishment, but after ... 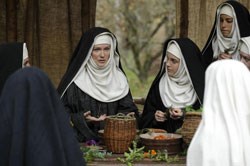