Hoffman's directorial debut is a quirky love story with pain and affection at heart.
Alissa Wilkinson|September 17, 2010
Our Rating

Jack (Philip Seymour Hoffman) works for his uncle, who owns a limousine company run out of a trailer on the Brooklyn side of the East River. His friend Clyde (John Ortiz) also drives a limo, and Clyde's wife Lucy (Daphne Rubin-Vega) sells seminars to grieving family members for a mortician named Dr. Bob. Like an awkward overgrown teenage son, unable to fend for himself and perpetually clad in a knit cap, Jack leans on Clyde and Lucy for stability in a world filled with looming dangers—swimming, cooking, dating. When things get overwhelming, he dons his headphones and grooves to Bob Marley's "Rivers of Babylon." When life overwhelms Lucy and Clyde, they—like some parents—turn to less innocent ways to cope with their own disillusionment. They're beginning to realize that their big plans will probably never happen. Their railroad apartment and mediocre jobs constitute their life—for better, or more probably, for worse.

Jack is lovable, in his helpless way, and knowing he'll need a nudge to find a soul mate, Clyde and Lucy decide to set him up with Lucy's coworker Connie (Amy Ryan), who is sweet, naive, and vulnerable to a fault. Both Connie and Jack know they are misfits—they're smart, even articulate, but missed the day the map for navigating life was handed out.

Still, Jack and Connie hit it off over dinner at Clyde and Lucy's place—each displays deal-breaking social awkwardness (Connie leads off with the tragic story of her father's death), but their mutual discomfort draws them together. As they walk to the curb in the snow, Connie mentions to Jack that she's always wanted to go boating, and perhaps they might go together when the weather becomes warmer. Jack agrees, delighted at her implied ... 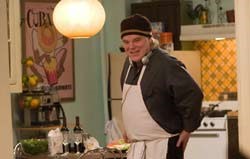