A visually compelling thriller with a meditative quality.
Lisa Ann Cockrel|September 1, 2010
Our Rating

If Terrence Malick were to put his gloss on Jason Bourne, the result might be something like The American. This visually compelling thriller from Dutch director Anton Corbijn (Control) has an almost meditative quality to it, the camera lingering over landscapes and absorbing natural light while the characters, mostly George Clooney as Jack, ponder What It's All Come To.

As an assassin and custom weapons designer, Jack is a master craftsman. This much is clear, but there is much left unclear about this American hiding out in the Abruzzo region of Italy after a stint in Sweden takes an unexpectedly abrupt and violent turn. "You have a gun? Why would you have a gun?" asks the Swedish damsel in much distress. The questions could continue in the movie's closing frames, albeit in a more existential tone of voice.

After fleeing Sweden, Jack makes contact with his handler, the world-worn Pavel (Johan Leysen) in Rome. A brief meeting is arranged and Jack is sent packing with a map and cell phone with instructions to lie low while the events up north are sorted. "Don't make any friends, Jack," Pavel warns. "You used to know that." Indeed, even Pavel's friendship is suspect. Jack ditches the map and the cell phone and is essentially on his own in the world.

Clooney gets top billing in The American, but Italy's Abruzzo region should be named prominently alongside him on the poster. The region's capital city, L'Aquila, was hit by a devastating earthquake just months before The American started shooting, but the production decided to stay to help spur economic recovery. The stony, wild beauty of this remote area between Rome and the Adriatic Sea is a fierce presence on the screen. It's only Corbijn's second feature film, and his 35 years ... 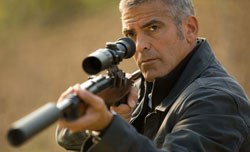