Authentic portrayal of good people, gracefully aging and helping those in need.
Brett McCracken|January 28, 2011
Our Rating

Befitting its title, Another Year covers the span of a single year. Divided into four seasonal segments—spring, summer, autumn & winter—the film follows the quiet passage of time in the lives of Tom (Jim Broadbent) and Gerri (Ruth Sheen), happily married British 60-somethings with stable jobs, a warm home, and plenty of love for each other and those around them. That may sound like an esoteric bore to some; but this is no "lifestyles of the mild-mannered and nearly retired" snooze. Rather, it's a deeply observant, humane, funny, and emotional study in the elusive and preciousness of joy.

Directed by acclaimed British filmmaker Mike Leigh, Another Year opens with a striking scene of Gerri, a therapist, counseling a depressed woman (Imelda Staunton) who rates her happiness a "one" on a scale of 1-10. Gerri does what she can to advise the woman, who is about her own age. But ultimately Gerri can only do so much; the impenetrable sadness of the woman will not break in one session. Gerri goes home to her pleasant husband Tom and they enjoy dinner and wine together, as they do most nights. They are happy and joy-filled, even while many of those around them—co-workers, patients, family members—are not. Rather than being dragged down by the sometimes frustrating and dreary company that surrounds them, Tom and Gerri embody a calm-in-the-storm patience and empathy, walking alongside the suffering, trying to make them better.

Tom and Gerri—along with their generally well-adjusted adult son (Oliver Maltman) and his cheerful girlfriend—are the heart and soul of this film, and theirs is the story this year-long narrative recounts. But in many ways Another Year is a study of the periphery characters—those ... 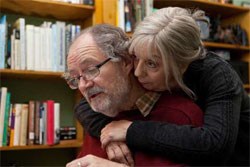