James Bond and Indiana Jones team up for a romp through the very wild, wild West.
Kenneth R. Morefield|July 29, 2011
Our Rating

Cowboys & Aliens is probably not the best film of 2011, but it may well be the most entertaining. Daniel Craig and Harrison Ford highlight an excellent cast that appears to be genuinely enjoying itself. Jon Favreau follows up his success with Iron Man and Iron Man 2 by demonstrating he is perfectly comfortable hemming a large production number. Meanwhile, the film's seven writers give us ample time with the supporting cast to make us care about the people in the action sequences without slowing down the pace.

Craig plays Jake Lonergan who wakes up in the desert with a wound in his side, a strange, manacle-sized bracelet on his wrist, and a case of short-term memory loss. The opening is reminiscent of the beginning of Lawrence Kasdan's Silverado, the first of many visual or narrative—but subtle—nods to beloved summer popcorn classics. Jake is immediately set upon by bounty seekers, and the ease with which he dispatches them, as well as how easily he stands up to a drunken bully outside the town saloon, hint that behind the reticent demeanor is a man not to be trifled with. It turns out that Jake is a wanted criminal, and he and the drunk are being shipped to a U.S. Marshal when their coach is besieged first by a posse led by town cattle magnate Woodrow Dolorhyde (Harrison Ford) and immediately after by … well, considering the title, is it a spoiler to say by a close encounter of the nastiest kind?

There are pretty much two ways to play material of this sort—as self-parody, like Snakes on a Plane, or pretty much straight, noting the impossibilities but taking them in relative stride, like Back to the Future. Favreau opts for the latter, and it suits the premise well. When the aliens lasso away several ... 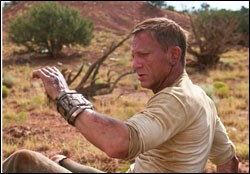