A mother-daughter bond is challenged amidst the sub-Saharan AIDS epidemic.
Kenneth R. Morefield|July 15, 2011
Our Rating

Life, Above All, opening in limited release, is the sort of film that will garner lots of muted praise but few enthusiastic endorsements. Set outside of Johannesburg, South Africa, it focuses on Chanda, a twelve-year-old girl with an adult world of pain and responsibility on her shoulders.

As the film opens, Chanda is making funeral arrangements for an infant sister. Her mother says the money to pay for the funeral has been stolen, but Chanda knows that it was taken by her stepfather for alcohol, or possibly drugs. She borrows the phone in a friend's house to inform relatives of the pending funeral, stands up to the drunken stepfather to get the money, and tries to understand the cryptic messages that friends and neighbors give her that imply some terrible disgrace at the core of her family tragedy.

Briefly—for perhaps the first ten to fifteen minutes—it looks like the film might be a South African Winter's Bone, bringing the environmental forces into starker relief by showing how they thrust adulthood upon those not yet physically matured and how that youngster grows to meet that challenge. Having established the horrific situation and the innocent protagonist, however, the film does not really have any place to go, and it stalls through most of its middle section. While there is an educational value for those who might be unaware of the extent that superstition and patriarchy continue to play in the spread of AIDS in Africa—Chanda is cautioned by one adult against even saying the word—the film goes for sympathy rather than empathy.

That it elicits that sympathy is laudable, but the ease with which it can press buttons is also a hindrance to any sort of development. Deciding that superstition and prejudice ... 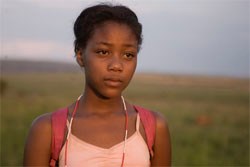