When it comes to Jesus Music, Bob Bennett was born about a decade too late.

He entered the world in 1955, twelve years after Chuck Girard, ten after Annie Herring, eight after Larry Norman and John Fischer. So while Bennett wasn't quite there at the beginning, he came around in time—in the late 1970s—to pick up the ball and keep it rolling along. His 1982 album, Matters of the Heart, was CCM magazine's Album of the Year, beating out Amy Grant's monster breakout project, Age to Age. Many still consider Matters of the Heart one of the best Christian albums of all time.

Bennett, now 56, is still making great music. And though he sometimes wishes he'd been around a little earlier to work with some of those pioneers, he's now done the next-best thing: He's made an album that honors their legacy.

We recently spoke with Bennett about the new album, his career, and the art of writing great songs. (Hint: Authenticity is key, but don't tell people you're being authentic.)

How did Jesus Music Again come about?

About four years ago, I was messing around on my guitar, and I started singing [Larry Norman's] "Unidentified Flying Object" for no apparent reason. I realized that no one has really gone back and treated ... 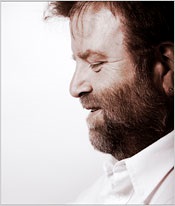