It's time to light the lights. 'The Muppets' is a fun, sweet, and true return to form. PLUS: The Gospel According to Jim Henson.
Todd Hertz|November 23, 2011
Our Rating

Once upon a time, a boy longed to make sense of a world he didn't quite fit into. And then he found The Muppet Show. These Muppets—all goofballs, misfits and monsters—were weird like him. And they reveled in that weirdness. If there are Swedish chefs and boomerang fish, the world can't be so bad, the boy thought.

This boy is Walter, the new Muppet character at the center of the story in The Muppets. But this boy was also me, and perhaps even you too. Actor Jason Segel certainly was. And so, when Disney—who bought the Muppets in 2004—met with Segel about projects he might be interested in, the actor had one thing in mind: reviving the Muppets.

The Muppets have not seen the big screen since 1999's Muppets from Space. In fact, since Disney took over, the Muppets have only done a TV movie and some YouTube videos. As co-writer and executive producer, Segel's vision for reviving the franchise was to let art reflect reality. If 1976's The Muppet Movie documented the formation of the Muppets, what if a new movie showed their re-formation after a long absence from the public eye?

And so, Walter's story is pretty much Segel's story: Boy grows up loving The Muppets. Muppets disappear off the face of pop culture. Boy never forgets them. Boy brings them back for one big show.

And some show it is. True to the spirit of Jim Henson's original creation, The Muppets is odd, zany, cameo-heavy, surprising, sentimental, and sweet. Bottom line: This is one fun movie. You really just can't help but smile, laugh aloud several times and even tear up—especially if you have fond memories about a frog, pig, bear and whatever Gonzo is.

In terms of nostalgia, The Muppets is pitch-perfect. Because the Muppets have always allowed ... 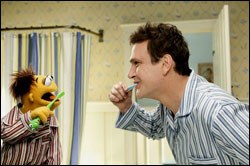