Did he, or did he not? Not is the answer in this costume drama of Shakespearean proportions.
Lisa Ann Cockrel|October 28, 2011
Our Rating

When William Shakespeare died in 1616, he left his children and friends some modest property, a smattering of money, and a few token heirlooms. To his wife he bequeathed the curious gift of his "second best bed." But more curious still is the fact that the will of the English language's most prolific and celebrated literary artist makes no mention of books or manuscripts of any kind.

In fact, the only written documentation historians can confidently ascribe to the Bard from Stratford-upon-Avon is his signature on some legal documents. Aside from the plays attributed to him, there are no manuscripts, letters, journals, or poems accredited to Shakespeare—a man who was ostensibly the author of 34 plays and 154 sonnets. So you can see how tempting it has been to contemplate alternative theories about the authorship of his body of work. Francis Bacon and Christopher Marlowe are among the more than 60 historical figures who have been forwarded at some point as the true author.Those who posit such theories are called anti-Stratfordians and they're a diverse lot, including Mark Twain, Orson Wells, Sigmund Freud, Ralph Waldo Emerson, and Sir Derek Jacobi (a British stage veteran). With the release of Anonymous, you can add director Roland Emmerich (The Patriot, The Day After Tomorrow, 2012) to the list of those who find compelling drama in the story behind the stories.

In Anonymous, Emmerich explores the theory that Edward de Vere, the 17th Earl of Oxford, is the true author of the Shakespearean corpus. He sets the stage quite literally with none other than Sir Jacobi providing a prologue under bright lights in a dark theater. As Jacobi argues the case for doubt about the identity of the beloved Bard, we see actors preparing ... 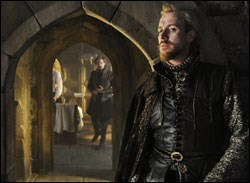