Margin Call is a disaster movie without any explosions. Or rather, it's a movie about the initial response and attempts to control what could become a calamitous disaster. It's like the first few minutes of Contagion, when a deadly disease—in this case, toxic assets poised to take down the entire global financial system—is discovered but has yet to infect too many people. But instead of hazmat suits and gas masks, the players here are all clad in bespoke Gucci pinstripes.

Margin Call is a fictionalized take on the first moments of the 2008 financial crisis. Set in a Wall Street investment firm over the course of 24 hours, Call dramatizes the inner workings and boardroom drama of a firm on the brink of collapse. The film begins at the end of a brutal workday in the unnamed firm; dozens of staff members are laid off, the first sign of trouble. One of those workers (Stanley Tucci) is on to something amiss in the firm. As security escorts him out of the building, he hands a flash drive to his young protégé, Peter Sullivan (Zachary Quinto), telling him to "be careful." Sullivan—a rocket scientist turned junior analyst, no joke—takes a look at the data and finds the reason for his boss's concern. The data shows that a serious storm is on the horizon for the firm—one that could jeopardize the company's future and seriously affect the market at large.

The details of exactly what's wrong are never fully explained (nor is the meaning of "margin call," for that matter). To everyday viewers and nonsubscribers of The Wall Street Journal, the jargon and technical speak will just sound like mortgage-backed mumbo jumbo. But the gist of it is clear: the company has a heap of financial assets that ... 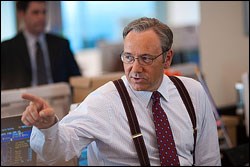