A poignant drama about the journey toward healing, wholeness, and the help we find along the way. PLUS: Interview with Martin Sheen & Emilio Estevez.
Kenneth R. Morefield|October 7, 2011
Our Rating

One of the best films of the year, Emilio Estevez's The Way is about a man, Tom, who is confronted with the death of his only child, his son Daniel. Tom, played by 71-year-old Martin Sheen, learns that Daniel was killed in a freak accident in Spain while walking the pilgrimage of Camino de Santiago, commonly referred to in English as "The Way of St. James" or, simply, "The Way." Tom heads to Spain to retrieve Daniel's ashes—then decides, practically on the spur of the moment, to process his shock and grief by walking the Camino himself, while wearing Daniel's hiking boots and strapping on Daniel's already well-stocked backpack.

With The Way, writer/director Emilio Estevez—who also plays Daniel in flashbacks in the movie—continues to build his reputation as a filmmaker. Like his 2006 film, Bobby, about a day in the life of the hotel where Robert Kennedy would be assassinated, The Way begins with setting rather than character. Estevez the writer has a knack for picking settings that allow him to bring together characters who might not interact much in other contexts, and the result is that the relationships come across as anything but rote.

Tom starts out on his trek alone, but as is often the case in close environments, he is thrown together with a small group of people whom fate has brought together at just the right time. Sarah is a woman who uses an abrasive, assertive demeanor to keep the world at arm's length, but who is herself carrying a load of hurt. Joost is more outwardly cheerful, insisting that the pilgrimage is recreational, but gradually letting his guard down to reveal his wounds. These three are eventually joined by Jack, a travel writer whose alcoholism may be either the cause of or an attempt ... 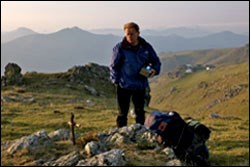