Such is the world of Todd Bentley and the Lakeland Revival of 2008, as depicted in new documentary.
Collin Hansen|September 13, 2011

Social media and satellite television now enable Christians around the world to follow spiritual events as never before. Probably the most notable example to date is the Lakeland Revival of 2008. So it's only appropriate that we now have Lakeland, a documentary about the controversial, dynamic event led by pierced, tattooed Canadian evangelist Todd Bentley.

Bentley and some of his followers

Director Roy Peterson, whose experience includes working on The 700 Club, traveled with his crew from England to track the Lakeland Revival shortly after its fame began to spread. Narrating the film with a slightly skeptical tone, he seeks to discern whether or not he's witnessing a genuine movement of God, a true revival of Christianity in America.

Peterson follows the strange twists and turns of Bentley's career in two years. First we see Bentley as a wildly successful healer revered by eclectic crowds of thousands in person and millions more through live television. He claims X-ray vision to see illnesses when he touches someone. His followers dance exuberantly to loud rock music, squirm on the ground, giggle uncontrollably, babble incoherently, and smash furniture. We're told the BBC, ABC News, and, of course, Geraldo Rivera have checked in on the event.

Then we see Bentley embark on what promises to be a blockbuster revival tour, even as he is beset by rumors of alcohol abuse and marital infidelity. A small crowd turns out for an event in South Carolina on 8-8-08, and just like that, the revival ends. Virtually disappearing for one year, Bentley divorces his wife and marries a former intern. He eventually submits to a restoration process and steps away momentarily from preaching. After apologizing for disappointing his followers, Bentley faces a bumpy return six months later as protestors hound him, calling him a false prophet and faulting him for setting a bad example for youth. When the documentary ends, we're uncertain about where the Lord will take Bentley next or how (even if) he'll use him. 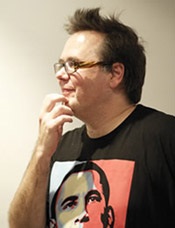 "After chasing God on the trail of revival for two years," Peterson concludes, "if there's one thing I've learned, it's that revivals are crazy, bizarre, and wonderful, a lot like the people involved."

Bentley's multimedia-savvy methods might be new, but he follows in a long line of radical revivalists. Notorious 18th-century preacher James Davenport and the Shaker movement come to mind. Indeed, Scripture offers examples of characters such as Simon the Magician (Acts 8) who pursued the miraculous power of the Holy Spirit to perform miracles. Sadly, the same error recurs with all of them: they neglect to emphasize what the Bible does, the finished work of Jesus Christ on the Cross and in the Resurrection.

Peterson's documentary does not deliver on its promise of discernment. Only after Bentley fails do we hear sound theology from his disappointed followers. It's not about Todd but God, they admit. Men will fail but Jesus never does. Meanwhile, Bentley's traveling circus is coming to a city near you.

Collin Hansen is a CT editor at large and editorial director of The Gospel Coalition.

Get the best from CT editors, delivered straight to your inbox!
More Newsletters
Tags:
None
Posted:
September 13, 2011
More From: Collin Hansen

1 of 2
Bentley and some of his followersDirector Roy Peterson