Kathy Bates helps the least of these in 'Harry's Law'.
Mark Moring|September 21, 2011

Imagine you're a Hollywood scriptwriter, and you're pitching an idea for a new TV show—a courtroom dramedy with a 62-year-old frumpy female lawyer as your protagonist. That's the first strike against you: TV and the movies have not been kind to aging women (Betty White's enduring popularity notwithstanding). Then the actress playing the role steps into the room and describes her character as an "unglamorous, rumpled, befuddled curmudgeon." Strike two. How fast can they say no to this pitch?

But they don't, because you're David E. Kelley, one of the most respected writers in TV history, winner of 10 primetime Emmy Awards, and the mastermind behind such acclaimed series as Boston Legal, The Practice and Ally McBeal. And the woman playing the ornery attorney? Oscar winner Kathy Bates.

Those are two main reasons that NBC execs bit on Harry's Law, and two reasons they brought it back for a second season this fall, starting tonight (Wednesdays, 9/8c). They're certainly the reasons I watched the premiere season, but they weren't enough to keep me coming back—or looking forward to season two. That took something more, and Harry's Law—like many of Kelley's previous shows—has it.

Kelley has often tackled important current and sometimes controversial topics. The Practice, which aired 1997-2004, took some swipes at the Catholic sexual abuse scandals, and Catholic League president Bill Donohue cried foul on several occasions. Through the years, Kelley has also addressed justice issues, and that's never been more apparent than with Harry's Law.

A once-successful but now-fed-up patent attorney, Harriet Korn is fired from her well-paying gig and decides to start anew—in an abandoned shoe store in a Cincinnati ghetto. ... 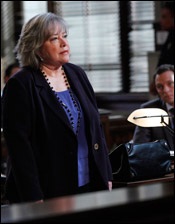