Though overly schmaltzy, this is still a cute and inspiring true story for the whole family.
Russ Breimeier|September 23, 2011
Our Rating

It's hard to beat a true story about someone overcoming a disability, or a cute animal surmounting adversity for survival. Dolphin Tale offers both, recounting the true story of Winter the dolphin from around 2005 when she lost her tail fin in a crab trap, only to be later fit with a prosthetic tail. You can still watch Winter via webcam on her site.

A remarkable story, for sure, and the filmmakers have recreated the basic details of Winter's rehabilitation while padding it with lots of inspiring and meaningful subplots. The movie is commendable for its wholesomeness and morality. But whether or not Dolphin Tale amounts to great filmmaking is debatable.

Set and filmed in Clearwater, Florida—where Winter was actually rescued—the movie centers around a lonely 11-year-old named Sawyer (Nathan Gamble), who lives with his mother Lorraine (Ashley Judd). The boy is failing school and struggling to make friends, heavyhearted over the divorce of his parents and the deployment of his cousin Kyle (Austin Stowell) overseas. One day he finds an injured dolphin washed ashore. He calls 911 for assistance and a team from the Clearwater Marine Aquarium arrives, led by Dr. Clay Haskett (Harry Connick Jr.) and assisted by his 10-year-old daughter Hazel (Cozi Zuehlsdorff). Nicknaming the dolphin Winter, they bring her back to their facility for medical attention and physical therapy.

Nathan Gamble as Sawyer, with Winter

Sawyer quickly makes friends with the marine staff, thanks largely to precocious Hazel, and forms a special bond with the dolphin that could aid in her recuperation. But even though Winter initially seems all right, she develops a bad habit of pushing her tail side to side rather than up and down. This could become a terrible strain on her spine, ultimately leading to her demise unless something can be done. Enter prosthetic doctor Ken McCarthy (an always delightful Morgan Freeman) and you can figure out what eventually happens.

Directed by Charles Martin Smith (an actor best known for roles in American Graffiti and The Untouchables), Dolphin Tale is packed with positive messages and inspiring themes. Winter's story is a reminder of our responsibility to care for other living creatures, and Sawyer shows that education (and life) can be fun when you find something you're passionate about. And when Kyle comes home with an army injury, Sawyer gets the idea for helping Winter—and we learn about the frustrations and determination of the disabled. 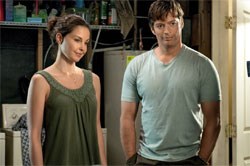 It's disappointing to learn that much of this Tale is fiction. Winter's story is real enough—she actually plays herself in the movie, remarkable given the amount of screen time she's seen swimming without her prosthetic tail. But there is no "Sawyer"—Winter was rescued by a small crew of fishermen—and the doctors are merely dramatized combinations of real people.

Does that ultimately matter? Not if things were handled better. The clunky dialogue and clichéd plot developments could be forgiven somewhat if they were rooted in fact. Dolphin Tale feels recycled a lot of the time, borrowing from many other formulaic family-friendly films, and the results feel on par with a made-for-cable production.

Everything plays out a little too familiar and conveniently, making parts of the film hokey, dull, and about 20-30 minutes too long. Dr. Haskell is a friendly and charming scientist—and the film just barely flirts with the idea of the hunky doc dating Sawyer's mom—but he's also running an aquarium/hospital on the verge of bankruptcy. And of course, it's wrong to even consider selling his aquarium to the "evil" corporate sponsor unless he could guarantee every animal's safety. Things build to a silly fundraiser carnival (again thanks to the resourceful 11-year-old) with lots of emotional speechifying and a swimming contest that feels very contrived. 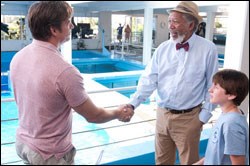 It doesn't help that the filmmakers decided to make this a 3-D film that caters to the kiddies—cheesy CGI effects of Winter jumping toward the screen, a poorly handled scene involving Sawyer's runaway remote-controlled helicopter, and a mischievous pelican thrown in for predictable comic relief.

This movie doesn't need such gimmicks or clichés. It succeeds because it has heart at its foundation, and it could have used a bit more realism in the story and script to build emotional resonance. The movie "buries the lead" in a sense by showing real footage before the credits of disabled children interacting with Winter. Now that's powerful stuff, yet it's barely touched upon in the film itself, aside from a scene or two. 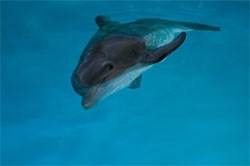 It's nevertheless likable enough, with enjoyable actors. Their performances aren't earth-shattering, but they throw themselves enough into the parts to seem like real people. And Freeman brings enough gravitas to the screen to make any movie that much more credible. Dolphin Tale has its heart in the right place and tells its story well enough for its core audience. Moralistic and sweet, there's plenty here for kids and parents to enjoy.

Dolphin Tale is rated PG for some mild thematic elements. We first see Winter washed up on a beach with her tail caught up in a crab trap, and there's a very small amount of blood on her. Due to her slow rehabilitation, Winter faces the possibility of being put down. Also, there's news of Sawyer's cousin Kyle being injured while serving in the military. Sawyer's friend Hazel utters a single profanity, muffled by a crash when she drops something. The film is otherwise perfectly suitable for children.