Veteran singer/songwriter steps into the shoes of Bible heroes for 'The Story' album.
Mark Moring|September 28, 2011

Nichole Nordeman has always enjoyed the stories of the heroes of the Bible, even sharing the Sunday school versions with her young children. But she never fully appreciated or understood those characters until she tried stepping into their shoes and literally giving them songs to sing.

That was her task in penning the lyrics, in first-person voice, for the 18 songs on (Music Inspired by) The Story, a new album chronicling Scripture's best-loved characters—from Adam and Eve to Abraham and Sarah, from Joshua to Job, from Mary to Jesus to the Apostle Paul. The CD—featuring Amy Grant, Steven Curtis Chapman, Natalie Grant, Bart Millard, Francesca Battistelli, Mac Powell, Natalie Grant, and more—is part of an ambitious project based on a series of books—The Story Bible from Zondervan, The Heart of the Story by Randy Frazee, and God's Story, Your Story by Max Lucado. There is also a music video DVD, and a December tour is planned.

Nordeman hadn't done much songwriting since 2005's Brave, her last studio album, opting to focus on motherhood and family instead. But when Norman Miller, the project's visionary and executive producer, approached Nordeman about the project, she was all in. She joined co-writer/producer Bernie Herms, Miller, and Frazee for a vision-casting meeting at Lucado's San Antonio home, and they were off and running.

CT caught up with Nordeman, 39, to talk about the new project, and what she's been doing in the six years that have elapsed since her last album.

What have you been up to since Brave?

I made a decision to stay at home with my kids and press pause on my life as an artist. At the time, my son Charlie was 3, and I was having a lot of trouble balancing my role as a mother with the demands ... 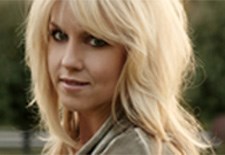