Miller's memoir comes to the big screen, but it's hardly Christian cinema as usual. PLUS: Interview with leading man, and a movie discussion guide.
Josh Hurst|April 13, 2012
Our Rating

Blue Like Jazz is based on the 2003 bestselling Christian book of the same title—but you should probably take that with a grain of salt. I'm not entirely sure how comfortable author Donald Miller would be with the "Christian book" label, but it was released by a Christian publisher (Thomas Nelson), a lot of evangelicals bought it, and it is filed under the "Christian life" section at Barnes & Noble. But what both the book and the movie ultimately deliver are spelled out in the book's subtitle: "Non-religious thoughts on Christian spirituality."

For those who love Jesus and movies, the implications of that promise are decidedly mixed. On the plus side, much like the book it's based upon, Blue Like Jazz is anything but a typical "Christian movie." Besides, director Steve Taylor, a long-time rocker known for irreverent satire and his disdain of schmaltz, has rarely done anything typically "Christian." Taylor brings this movie the kind of grit (read: off-color humor, some brutal satirizations of evangelical subculture, and even some four-letter words) that you won't find in, say, Courageous. And he does a lot with a little, budget-wise; this film was financed largely via Kickstarter, and while the production values are not exactly high, it is nevertheless a quirky and genuinely funny indie. The acting is solid, if unremarkable, though Marshall Allman (who plays Don) deserves kudos for playing a character who is essentially a blank canvas, and making him someone we sympathize with and are engaged by.

The downside? Separating "Christian spirituality" from the fundamentals of the gospel message means, in the case of Miller's book, an emphasis on feelings and experience, on social justice and an individual search for truth. ... 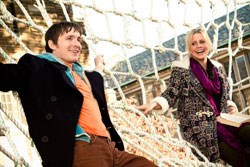