A rousing and satisfying—if conventional—conclusion that fails to rise to the level of excellence of its predecessors.
Todd Hertz|July 19, 2012
Our Rating

In The Dark Knight, Bruce Wayne's childhood friend Rachel Dawes wrote him a heart-wrenching letter. It explained that she no longer believed (as she did in Batman Begins) they'd be together once Gotham City no longer needed his masked alter ego. The issue, she wrote, was "now, I am sure the day will not come when you don't need Batman."

This is where The Dark Knight Rises picks up director Christopher Nolan's character study. Nolan's trilogy began by answering why a grown man would dress like a bat. The middle film explored whether such a hero could fight darkness without being swallowed by it. And, now, the final installment wonders if Bruce Wayne needs Batman more than Gotham does. Could he ever stop—or is this his lone purpose until death?

Batman, too, has evolved throughout Nolan's on-screen graphic novel. Police Commissioner Jim Gordon has talked about Batman being the hero Gotham needs. And like any living being, its needs change. First, Batman needed to be a dangerous thought—a criminal's boogeyman in the night. In The Dark Knight, Gotham needed a scapegoat to bear its sins. Here, the city sinks to a new low—and a new role for its guardian rises.

Eight years have passed since Batman (Christian Bale) vanished into the night, turning from hero to fugitive. Assuming the blame for the death of D.A. Harvey Dent, Bruce Wayne sacrificed everything for what he and Gordon (Gary Oldman) both hoped was the greater good. Since then, Gordon has been haunted by the gnawing truth. And Bruce cannot move on from the loss of Dawes, the woman he thought he'd spend his life with when he finally hung up his cape. Now a mysterious hermit, he hasn't been seen in public in years—as Bruce or as Batman. 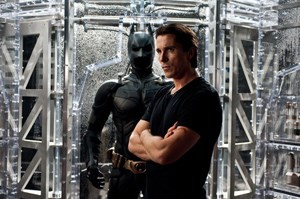