A boy's search for a father's love anchors this new masterpiece from the Dardenne brothers.
Brett McCracken|March 30, 2012
Our Rating

Jean-Pierre and Luc Dardenne, filmmaking brothers from Belgium, have been quietly churning out masterpieces for decades with their distinct brand of spare, naturalistic cinema. Tackling family and social struggles in lower class Belgium, their films—like Rosetta (1999), The Son (2002), and The Child (2005)—have received widespread critical praise and garnered numerous awards at the Cannes Film Festival, where their latest, The Kid with a Bike, won the Grand Prix in 2011.

Now playing in limited theaters and on demand in the U.S., Bike—in French with English subtitles—is like many of the Dardennes' films: It's a deceptively simple and yet powerfully humane portrait of children and parents, set against the downtrodden urbanity of a contemporary Europe haunted by the vestiges of a Christian past. The film is a clear riff on Vittorio De Sica's Italian neo-realist masterpiece, Bicycle Thieves (aka The Bicycle Thief, 1948), which also explored issues of family and economic struggle in urban Europe. Both Bike and Bicycle are about a father, his son, a bike, and a search. But where De Sica's film is about a man and his boy searching a city (Rome) for a bike, the Dardennes' film is about a boy who finds his bike early in the film and then rides it around a Belgian city, searching for his absentee father.

The boy in Bike is 11-year-old Cyril (Thomas Doret), a freckled, strawberry blonde rapscallion who's quite the handful: he bites, he bolts from authorities, he can't sit still. He's the epitome of unsettled. In the film's opening shot, Cyril is on the phone trying to get in touch with his absentee father (Jérémie Renier, a Dardenne regular), but there is no dial tone. The tragic one-sidedness of ... 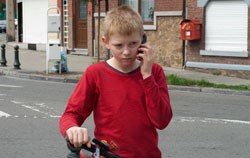