Yes, his new album delves deeply into the shadows. But then, so does the gospel.
John J. Thompson|September 11, 2012

Today, 50 years after releasing his self-titled debut LP, Bob Dylan unveils Tempest, his 35th studio album. And with it, Dylan, 71, continues what may be the longest uninterrupted era of critical acclaim—including our 4-star review—of his incredible career.

Not that Dylan has ever seemed to care too much for critics' opinions, but since the praise, sales, and awards of 1997's Time Out of Mind, he has maintained a consistent formula of swampy, shuffling, roots rock settings upon which his increasingly ragged voice howls, whistles, winks, and moans.

Elements of Christian theology comingle with folklore, classic poetry, rural history, and oblique personal confession in arresting ways. Though it seems most contemporary Dylanophiles see this era as having begun 15 years ago, the seeds can be found in his often maligned late '80s sets Down in the Groove and Oh Mercy.

Since last month's brief interview with Rolling Stone about the new album, much has been made of the "darkness" of it all. Dylan remarked that he had originally intended for this project to be more specifically "religious" in nature, but the strictures he placed on his songwriting process caused the focus to shift to an assortment of stories and subjects that presented themselves more readily. Those changes notwithstanding, Tempest is as deeply spiritual and haunting as his best work has always been.

Rolling Stone calls it "the single darkest record in Dylan's catalog." The Los Angeles Times, regarding the title track (a 14-minute opus on the sinking of the Titanic), observes, "The reference to an 'inner spirit' implies an outer spirit and in this context suggests an inner transformation under way. And sure enough, Dylan sees an earthly disaster in spiritual terms, and ominously spiritual at that." London's Telegraph notes the album's "dark ruminations," calling it "one of his darkest, bloodiest and most foreboding collections of songs, set in a barren landscape of Godless self-interest, moral equivocation, and random violence." 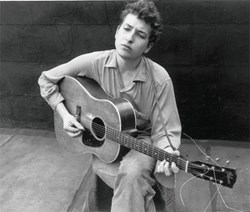 But if all these experts think such darkness is new to Dylan's work, they haven't really been listening for the last 50 years. In 1962 a 21-year old Dylan concluded his debut album with "See That My Grave Is Kept Clean" and this lyric: "Well my heart stopped beating and my hands turned cold / Now I believe what the Bible told."

While Dylan lore has him facing death at least twice (his mysterious motorcycle accident in 1966 and a fungal respiratory infection that affected his heart in 1997), the truth is that he has embraced darker themes from the very beginning. To talk about the "dark side of Bob Dylan" is to imply that there is a light side. Sure, the bard has broken protocol a few times, but even on the sweetest of his love songs—"To Make You Feel My Love," for instance—there is always darkness around the edges.

"Rainy Day Women #12 & 35," with its cartoonish pub-song wailing "Everybody Must Get Stoned," is about persecution and abuse dressed up like a drinking song. Like a master painter, Dylan uses these darker brush strokes to give his songs depth, contrast, and resonance. He may be bending the escapist rules of popular music by constantly contemplating mortality, sin, the dark power of the human heart, and the fallen-ness of the world he calls his temporary home, but his creative DNA is far more informed by traditional blues, country, and folk music than contemporary pop. Thank God.

Though Dylan certainly did not invent laments, murder ballads, depression songs, or apocalyptic literature, his greatest contribution to the collective art experience of the 20th and 21st centuries may be how commercially accessible his explorations of the shadows have been.

Maybe it's an accident of timing, but Dylan's ecclesiastical voice is absolutely unique within the confines of the Baby Boomer generation and the art they crafted. The fact that his musical sojourns so frequently and artfully included well formed considerations of the gospel simply adds to his gravitas. The material that closely followed his conversion to Christianity in the late 1970s reflected a far darker and more biblically accurate view of the life and priorities of a Jesus follower than most socially polite "gospel" music would ever dare. There were no holds barred, for instance, in the decidedly impolite and absolute sentiments of "Gotta Serve Somebody":

Smack in the middle of the "me" decade, here was a prophet crying in the wilderness that any of our concepts of personal freedom are ultimately a myth. Our option is not to serve or to be independent, but simply to choose to whom we will ultimately bow. Sure, many of his fans hated this era of his music, but any honest consideration of his meta-narrative would have to include stark observations such as this.

There is nothing darker, and more liberating, than the ultimate message of the gospel. Despite the sentiments of self-help televangelists, politically correct professors, and greeting card theologists, the gospel is as dark as it gets. Every human is born guilty. Every person lives under a death sentence. The human life is ultimately a choice between a temporal (though eventually victorious) struggle against our own nature—the death of the self—followed by an eternal reward of rest and peace, or it is about a loving God surrendering his creation to its own willful desire to be apart from him eternally. The choice is up to each individual person, but they face a host of enemies and allies along their own journey.

Regardless of his well-shrouded personal theology, Dylan has always been extremely adept at recognizing the human condition and calling it what it is: a life-long struggle with eternal implications. Certainly many Christians wish he would have remained as didactic as he seemed to be on his "Christian" records Slow Train Coming, Saved and Shot of Love, but that's because many Christians seem uncomfortable with the process of discernment. Why wrestle with meaning when there are easier answers to be had elsewhere?

As influential as those records were in the Christian community, the truth is that Dylan's impact goes back much further. Early Christian artists such as John Fischer, Larry Norman, Randy Stonehill, and Mark Heard (among many others) were much more inspired by the prophetic impact and truth-telling of Dylan than they were of the syrupy-sweet Christian music of their day.

His influence continued long after the "Christian Years." Scores of edgy, brave, Christian artists echoed Dylan's brutally realistic and relentlessly honest style. Switchfoot's 2005 album, Nothing Is Sound, includes the song "Happy Is a Yuppie Word," inspired by Dylan's answer to a 1991 Rolling Stone question about whether he was happy. "These are yuppie words; 'happiness' and 'unhappiness," he said. "It's not happiness or unhappiness; it's either blessed or unblessed." Switchfoot's Jon Foreman may have said it best elsewhere on that same record in the song "The Shadow Proves the Sunshine," clearly echoing Dylan's penchant for Psalmic meditation:

Oh Lord, why did you forsake me?
Oh Lord, don't be far away
Storm clouds gathering beside me
Please Lord, don't look the other way

With songs like "Pay in Blood" on Tempest, it's clear that Dylan is not done referencing the Bible for ultimate answers. It's sad that many people will likely miss the obvious substitutionary references in the song. The implications are powerful, and yes, dark. We each ultimately pay in blood—either our own or that of Christ. That's certainly not a message that is "safe for the whole family," but it is the gospel.

The pop landscape is populated with artists and fans who are perfectly satisfied to whistle past their own graveyards. So much modern music simply serves as ditties to sing along to as they ignore their mortality, their fallen nature, and the implications of their choices. Some people, however, choose to walk through the cemetery gate, spread a blanket on the ground, and have a picnic. It is only when the implications, powers, and ultimately the weakness of the grave are confronted, processed, and inhabited that real peace can be found.

The truth is that there is much darkness left to be overcome before we find ourselves in our eternal rest. There are a good number of contemporary Christian artists who can take a cue from Bob Dylan when it comes to the transformative power of the dark.