An entertaining addition to the buddy cop genre, highlighted by both humor and gravity.
David Roark|September 21, 2012
Our Rating

You're a cop, and you've got a chance to bust the bad guys. But you might have to bend the rules to get the job done—and you've got to make that decision in the blink of an eye … or the split second it takes to pull a trigger. You've got a reputation as a cop with integrity, and you don't want to put that on the line. But if you don't do something rightnow, the bad guys might get away. Or kill you. Or both.

What will you do?

Such is the unimaginable situation that many big-city police officers find themselves in every single day—cops like Brian Taylor and Mike Zavala, the protagonists in End of Watch. Starring Jake Gyllenhaal (as Taylor) and Michael Pe—a (as Zavala), the film follows these partners as they brave the heat of South Los Angeles, doing on a daily basis—car chases, drug busts, shootouts—what cops in other cities may never do in a lifetime. They're enthusiastic about their jobs, not because they think of themselves as righteous "heroes" but mainly because they know nothing else. They're just trying to do the right thing, and that sometimes puts them in the wrong place at the wrong time—with life-or-death decisions to make in the blink of an eye.

Using a found footage approach—Taylor is shooting a documentary for a college course, and thus always has a camera with him—writer-director David Ayer uses hints of the conventional and unconventional, particularly the first-person point of view and Cops-like shots from the police car. These techniques come together to create something surprisingly fresh.

But it's more than just a notable exercise in style. It captures the tension and incredibly difficult, dangerous dilemmas our public servants face frequently—including ... 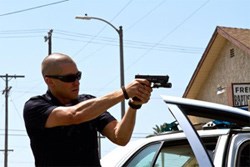