An estranged father and daughter try to reconnect while scouting a baseball player for the upcoming draft.
Kenneth R. Morefield|September 21, 2012
Our Rating

Let's get the required baseball metaphor out of the way up front. Trouble with the Curve telegraphs its pitches so blatantly that its effectiveness is seriously diminished. Neither subtlety nor unpredictability is an absolute requirement for an entertaining film, but they help. Like a baseball pitcher that is reduced to throwing nothing but fastballs, the film has no finesse. It can only try to overpower the viewer with raw emotion.

And there is plenty of emotion to be mined here. Clint Eastwood plays Gus, an aging baseball scout whose wife has passed, whose daughter Mickey (Amy Adams) feels he abandoned her, and whose employer (the Atlanta Braves) wants to push him into retirement to make way for younger scouts who use more modern, statistical methods of predicting player success. The fear of being put out to pasture makes Gus put off eye surgery, risking blindness, so that he can go on a road trip to investigate a promising prospect that the Braves may take in the draft.

For fans of professional sports, that's not a misprint. The film represents the modern sports world as one where there is no video of prospects, no Internet, and where teams will invest millions of dollars on a first-round draft pick based on the report of a single scout. That the film gets basic details wrong about the business it depicts is less offensive than it is evidence of lazy writing. The film is simply not interested in the baseball setting; it is merely a context for the father-daughter drama to play out.

Unfortunately, that part of the plot is most conventional and hence the most predictable. Gus's friend and supervisor (John Goodman) asks Mickey to keep an eye on Gus during the trip, despite the fact that she has a crucial presentation coming ... 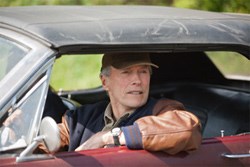