Christian Bale and Joel Edgerton on Reading the Bible, Making a Modern 'Exodus'

Most audiences—especially religious audiences—will have a complicated relationship with Ridley Scott's new epic film Exodus: Gods and Kings, out tomorrow (here is Brett McCracken's review). It's an old story that's been retold many times on screen (read Peter Chattaway's exploration of the history of Moses movies here). It's a beloved story that's vital to the identity and story of three major world religions.

And there is the complicated problem of casting white actors in the film's major roles—a question that has implications that go far beyond the film and that deserves to be treated carefully and in more depth, particularly given the story of the Exodus.

But no matter what, it's a film that many people will see and discuss. On Monday, I participated in a roundtable discussion with a number of journalists, during which director Ridley Scott, Christian Bale (who plays Moses), and Joel Edgerton (who pretty much steals the show as the Pharaoh, Ramses) talked about about Exodus: Gods and Kings.

After the roundtable, I got to sit down alone with Bale and Edgerton, who were funny and gracious. I asked them about how they prepared for their roles, what makes this film different from its predecessors, and why the story of the Exodus continues to be made into movies. 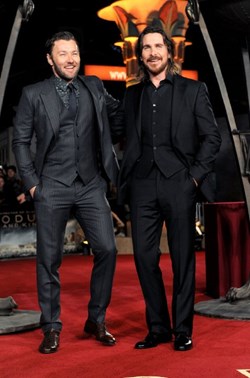 Christian Bale and Joel Edgerton at event for 'Exodus: Gods and Kings'

I'm really intrigued by the family dynamic of the story. The whole movie was set up as being about choosing your family, or being rejected by family. There's a really big emphasis on the question: “Are these your people, or not?” There's the death of the firstborn sons, and of course there's the brotherly relationship. This all feels really close to what the story of Exodus is about, which is God choosing his people and leading them out of slavery. How much did this come up for you as you were preparing for your roles in the film?

Bale: Very much. I think it helped us find an ending for the film. The five books of Moses just keep going and are fascinating. Some of the earliest conversations I would have with Ridley would be me calling him up and saying, How can you not have this section in it? How can you not have the prayer of Miriam? And how can you not . . . Because everything seems to become essential.

Then you realize you can't make an eight hour long film.

So it became, well, if we really focus on this brotherly bond—which is a fascinating bond: two men who are cynical about this pat theology of the Egyptian gods, who view it as a means to prop up the Pharaoh and have the citizens worship their leader. One is exiled and experiences purification in the desert and has a family and then is compelled by God; the other comes once he's in power to have all of the arrogance of power and also the trivial nature of someone desperately holding on to power. He starts to believe the hype, starts to believe that he is a god, and then there's that ensuing confrontation. That was such a complete relationship in and of itself, and it gave us right around a two-hour long film. So [that family story] ended up being perfect.

Then I just had to put up—well, no, rather Ridley just had to put up with me constantly saying Yeah, but, there's all this other great stuff; Yeah, but, Rid, have you read this bit, I'm going to send you this passage now. And he's like, Yeah, that's great, Christian, I mean, I can't film everything.

There's all these things that didn't end up in the film—the rod turning into a snake and back again, the leprosy, and so on.

Bale: Yes. There's an awful lot which—it could have ended up being a film of just endless spectacle. There had to be editing of that. That's a very painful thing to do with any script, and it's an even more painful thing to do when you're adapting a book--and especially obviously when that book is the Bible, it's incredibly painful to say, we really can't have that in here. But unfortunately, that has to be done. Those choices have to be made. Not by us, but by Ridley, obviously.

Edgerton: Unless you do an HBO series.

Bale: They're getting just phenomenal. The level of quality is amazing. Very often, I'll actually read a script now and I'll say, I think this works better as a series because there is so much in here that you need more time to digest it properly. 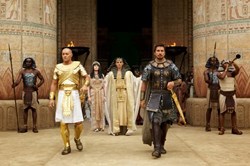 Bale: You know, I have to sort of disagree with you on that. Speaking for myself, I suspect—and speaking for Joel, I know for a fact he wouldn't last for a second in that era. [Laughter all around] I think I'd last a little bit longer than him. These were very harsh times. And I suspect that there's really not many people alive today who would truly fathom just how tough life was at that time.

Well, I was thinking more about how most Exodus adaptations have been the battle of good against evil. But in this movie, these are really complex characters. The further you get into them, the less you're sure. It's not a hero and a villain; it's sort of like two antiheroes, almost, duking it out. That felt like a really modern way to tell this story.

Bale: I think the alternative is—well, with great respect to The Ten Commandments and Charlton Heston's performance and Cecil B. DeMille, throughout that film there's an inevitability that Moses will succeed and Moses will become a prophet. You never doubt it.

And I think that this story is incredibly relevant. I felt like we wanted to make it far more relevant than a fairy tale. Moses, in my research and my reading of the Torah, is such an incredibly complex man, and really does experience almost every emotion under the sun, which I (with respect again) have not seen portrayed in that fashion. And that's why I wish that we could have filmed an eight-hour-long film, because it was just fascinating.

Edgerton: I agree with that, and also the idea that we allow ourselves to be human at every point in the story. Whenever I work on anything, I strive to find the light in the dark and the dark in the light. All of us are people are striving, I think, to do the right thing—or to do the thing that we think is right for us. And even if that means you're defined as a selfish person, or a fascist in the extreme, as the Pharaoh is, he still has a point of view. His point of view would be that Moses in the latter half of the story, particularly when he comes back from exile, appears to be crazy. He has this crazy idea that he's in conversation with a single god. Then he wants to disrupt the infrastructure of the empire. This is not sitting well with [Pharaoh's] ideology, and he therefore is going to see Moses as a rebel who needs to be put out. 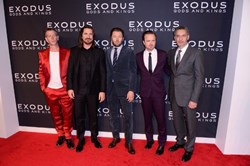 And yet, in the context of that grand struggle of ethics is still this guy who has a child, too. So when that final plague—that final, wrathful moment—comes, that is the straw that broke the camel's back for the Pharaoh. We can also see him as a father because we've seen him as a brother and we've seen all those human relationships fertilized in the script. I think that modernizes it for us because we go: look, you're a daughter, you have a family. We can relate to that. I think that's the great way of taking a sword-and-sandal or a science fiction [film] and bringing it into our own hearts.

Why do you think this story keeps getting remade? What feels so important about it to modern audiences?

Edgerton: Because we're so bad to each other, everyone on the planet, all the time. I think the great thing about religion is it's there to teach us the good path, and that we're all equal, that we should be treated as such. You mentioned in the beginning that we like to look after our own—who are your people? It would be great if we could hold that idea and also respect others who are not your people, because essentially we are all the same. Hopefully that's what it's there to teach us.

And yet this story is one of those great stories of the opposite—of the way it shouldn't have to exist. It's a great story of the struggle of one group of people getting out from underneath the weight of another through great pain and exertion.

(I made some minor edits for clarity.)

Christian Bale and Joel Edgerton on Reading the Bible, Making a Modern 'Exodus'

Christian Bale and Joel Edgerton on Reading the ...