Can a film set entirely in a car, with just one actor driving and talking to a handful of unseen characters on speakerphone, make for a compelling hour and a half at the movies? Thanks to a star-making performance by Tom Hardy (The Dark Knight Rises), Locke powerfully answers in the affirmative.

Written and directed by Steven Knight (Redemption), Locke joins the ranks of a growing genre of what might be called "minimalist actor showcase" films, which leverage a fairly simple concept (almost always a survival story) to explore a solitary character in depth. Think Castaway with Tom Hanks (2000), Buried with Ryan Reynolds (2010), 127 Hours with James Franco (2010) and last year's Gravity (Sandra Bullock) and All is Lost (Robert Redford).

Like the latter film, which stars Redford as a seaman trying to survive alone after his yacht starts sinking, Locke is about one man doing his best to control a personal crisis, in this case while driving a car rather than steering a boat. Set in the U.K., Locke follows Ivan Locke (Hardy, sporting a Welsh accent) on one night of driving as he leaves a construction job near Birmingham and drives to London for a reason that becomes clear as the film progresses. Unfolding in what feels close to real time, the film's plot gradually reveals itself through Locke's phone conversations with various family members, friends, and coworkers, each representing an aspect of the man's life that is at or near a tipping point, high stakes all around.

With the exception of the opening and closing shots, the entire action of the film takes place in the confined interior space of Locke's car, which functions as a sort of "command center" for a man desperately seeking to systematically fix a multitude of problems and maintain control over his life. A construction foreman in the middle of the biggest building project of his career, Locke is a man of rationality and reason (his name is a nod to Enlightenment philosopher John Locke). His company pours concrete and he himself deals in concreteness; he's about empirical reasoning and orderly problem solving. As he moves back and forth from call to call and crisis to crisis in his car, his "Mr. Fixit" approach to life becomes clear.

One of the strengths of Locke is the way it explores masculinity, both in its classic and contemporary forms. Like Robert Redford in All is Lost, Hardy's Locke is a man of action who knows what needs to be done and, come hell or high water, gets it done. Though Redford is largely silent in Lost and Hardy is as talkative as a man gets in Locke, their general disposition is the same. They are men under pressure, in survival mode, committing to proving their grit and above all, avoiding the vulnerable place of having lost control. There's a sense in both films that survival is not necessarily as motivating for these men as is the opportunity to prove their worth as men: conquerors, providers, survivors of any challenge.

It's interesting that, with the exception of Bullock in Gravity, these solitary survival films are all one-man shows. Does the frequency of these films in recent years reflect a cultural angst at the changing (weakening) role of men? Or maybe, at least, a cultural interest in classic masculinity—akin to the way beards, flasks, pipes, and lumberjack attire have become fashionable for young men, along with anything evocative of grandfather or Gatsby.

One of Locke's most insightful commentaries on contemporary masculinity has to do with technology. That "command center" setup of the car's interior is important. The male propensity for emotional detachment is only amplified here: Locke is dealing with the people in his life in a totally mediated way, toggling between their calls and voicemails as one toggles between windows and tabs on a computer screen. The metaphor of a screen (whether computer, tablet or smartphone) as the multitasking command post from which we increasingly manage the simultaneous "to-dos" of work, family, relationships and leisure is powerfully suggested in Locke.

And on one hand, it is a wonder to behold the way that Locke, like so many of his bluetoothed contemporaries, can so efficiently navigate a business crisis, a marriage crisis, even soccer talk with his sons, all while navigating a vehicle en route to London.

But on the other hand it's disturbing. It makes you wonder whether today's technologies only exacerbate men's tendency to compartmentalize life as a series of tasks and projects to manage, keeping things concealed and cordoned off from one another in unhealthy ways. In Locke we see a man connecting with people on his terms and timeline, cutting off conversations where convenient and making time only for the most essential business to be carried out. He is today's man, running a game plan from an isolated press box, a disembodied iWorld where channels can be turned on, tabs closed and search histories erased whenever convenient. 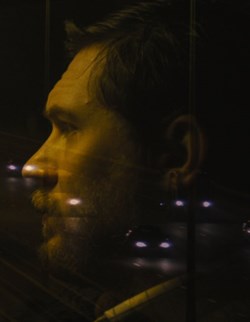 And yet the perception of total control is an illusion, and this is Locke's most powerful challenge to today's man. As the film progresses we realize, as Locke does, that as much as we desire full control, there will always be things outside of our power. Men want to pull themselves up by their bootstraps. They want to earn it. But sometimes being a man means embracing one's limits, humbling yourself, and accepting the reality of a higher sovereignty.

The best moments in Locke are the brief glimpses we get of the man's vulnerability. They are few and far between, but thanks to the film's close-up camerawork and Hardy's astonishing performance, we can't miss them. They reminded me of epiphanies in other films where the "I've got it all under control" man comes to a humble awareness of his own limitation: the final moments of All is Lost; the "I wanted to be loved because I'm great" moment in The Tree of Life when Brad Pitt concludes, "I'm nothing."

These are moments of grace. They are moments when the reality becomes clear that "self-made" can only go so far, that we can never truly survive on our own, and that that's a good thing. We need grace. And while grace cannot be earned and must accepted from a humble posture, grace is not opposed to effort, as Dallas Willard says.

Indeed, one of the most graceful things about grace is that it doesn't belittle our efforts. God created us to work, to strive, to carry Adam's torch of not merely surviving but cultivating a world that flourishes in the way it was meant to. Men want to "fix" things, to bring order out of chaos; it's only when these desires becomes fodder for pride and "I don't need God!" self-sufficiency that they become problematic.

Both Locke and All is Lost (and even Gravity, for that matter) explore the intersection of human effort and supernatural grace. Each explores the ingenuity of mankind in bringing order out of chaos, surviving a harsh world through God-given creativity and endurance. And yet each highlights man's limitation too: his inability to save himself. In the final upward glance ("thank you") of Gravity, the downward reach of rescue in All is Lost, and the cry of new life at the end of Locke, we see the necessity and beauty of salvation from outside the self.

Locke is rated R entirely because of strong language, which is used throughout the film, though not in a gratuitous way. The film's serious plot lines include mention of infidelity and a woman in a hospital who has to undergo an Caesarean section, though we don't seen any of it.

Brett McCracken is a Los Angeles-based writer and journalist, and author of the books Hipster Christianity: When Church and Cool Collide (Baker, 2010) and Gray Matters: Navigating the Space Between Legalism and Liberty(Baker, 2013). You can follow him @brettmccracken.