A few inaccuracies and a little kitsch, but an active and thriving community nonetheless in the series' fourth episode.
Peter Chattaway|April 28, 2015
Image: NBC
Pilate (Vincent Regan) forces Caiaphas (Richard Coyle) to eat the ashes of his dead soldier.

It would be a mistake to say that life is getting back to normal for the apostles—nothing will ever be "normal" for them again, after what they've experienced—but the fourth episode of A.D. The Bible Continues just might be the first one we've seen that isn't built around a major supernatural event (and the special effects that come with it).

The first three episodes all peaked with spectacular sequences like the resurrection of Jesus and the coming of the Holy Spirit at Pentecost. This episode, on the other hand, gives us a sense—just a small sense, but a sense nonetheless—of how the Church is beginning to grow and work as a community.

People are baptized, property is shared (with former tax collector Matthew in charge of the bookkeeping), and a new base of operations is found when Barnabas gives the Church a plot of land where they can live and work far from the hostile authorities in Jerusalem. (Acts 4 says Barnabas sold a field and gave the Church the money, but never mind.)

The episode is incorrect when it indicates that the Church amounted to only a "handful" of people prior to Pentecost—Acts 1 tells us there were about 120 believers, or nearly ten times what this series showed us, before the Holy Spirit came—but it captures well the joy and enthusiasm that accompanied the growth of the Church in the early chapters of Acts.

It also captures the troubling fate of new believers like Ananias ... 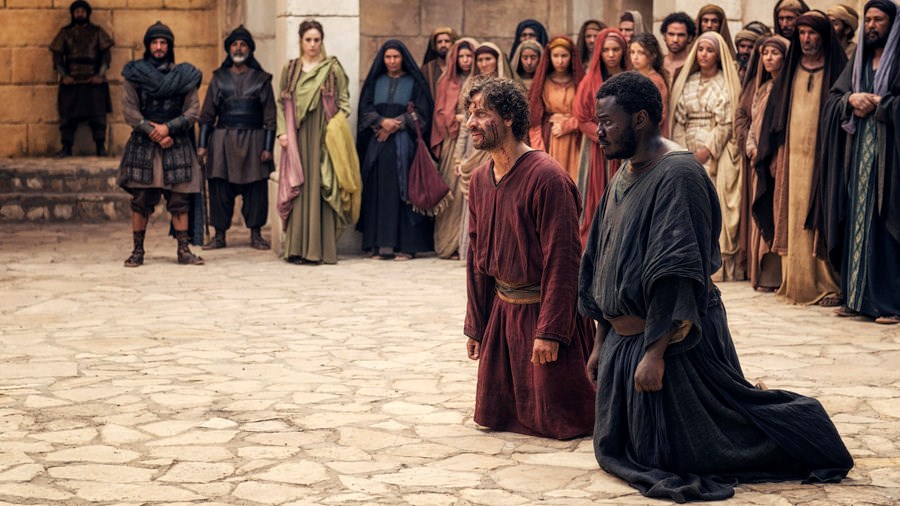