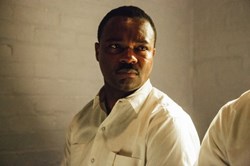 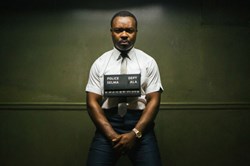 But I do know God's voice. I became a born-again Christian at the age of 16, and my spirit didn't doubt it. My flesh was a little more skeptical. I auditioned for the role, and the director who was attached didn't feel I was right for the role, which kind of surprised me spiritually. But like I say, my soul was like, okay, I understand. I hadn't done many films, really.

But then what went on to happen was a seven-year journey in which God gave me opportunities—from playing a Union soldier in Lincoln, who was basically a kind of pre-incarnate version of Dr. King asking for the vote, opposite Abraham Lincoln; to playing an African American fighter pilot in Red Tails; to playing a preacher in The Help; and then the son of a butler in The Butler, which gave me a sort of educational tour of what it meant to be an African American in this country; and all the way to this divine moment we're in now, when this film is dropping at a time where we are in the midst of racial unrest in America yet again.

Can you talk a little bit about the spiritual atmosphere that happened on set?

One of the amazing things about doing Selma is that every single day things were happen that just don't happen on your average set. There's a point in the film where there's a speech I give from the Capitol set right at the end of the film and the production designer had put a lectern there for me to do a speech from. And he just didn't feel it was right—it felt like Dr. King should be doing that speech from a pulpit.

So he walked to Dexter Avenue Baptist Church, which is just a few hundred yards away from where we were shooting that scene and asked them if they had a pulpit we could borrow. They said, “Well, you can't have the one that's in the actual church, but we found this pulpit in the basement two days ago. You can use that one.”

And then we found out it was the actual pulpit Dr. King gave that actual speech from.

The exact same pulpit. And it had been found two days before! These events we're showing in the film happened 50 years ago. At any time in those intervening years could that pulpit have been found.

Things like that happened so many times. It was like God was winking at us. A lot of the people on the set were people of faith—they were either Christians or they'd been raised that way, and so it was very easy to talk about faith. Obviously, we were portraying people of faith, and there were several scenes, especially more difficult ones, where we would all pray together before going into those scenes.

Which scenes those? Why did you decide to pray during them?

There are a couple of speeches I give in church in the film. One of them is the “give us the vote” speech; the other is the “who killed Jimmy Lee Jackson?” speech. The day that we were going to be doing those scenes, there were 500 extras there in the church. And I decided—or I asked—if it was okay for me to pray with everyone just before we go into it. It was going to be the first time I was giving speeches as Dr. King. And so I prayed.

Just after I prayed, everyone was really fired up, and we were about to go into the scene. Ava, our director, was just about to call action—and all the lights suddenly went out.

An electric storm started, which meant that they had to shut the generator off in case it electrocuted anyone. We had to break for lunch early. We all went outside, and the sky turned pink and purple with a double rainbow. There are people who had lived in Atlanta for years who said they'd never seen the sky do that.

So we came back—it was in the evening. We'd seen this sky, we'd lived through what felt like a spiritual event, and then we shot those speeches, which as you can imagine, was far more charged than it would have been otherwise.

Did you feel God's presence when you were delivering your lines?

I absolutely did. I had always known that I couldn't play Dr. King purely out of my own ability as an actor. When you look at him give those speeches, you can tell that he is taken up by something other than himself. He is flowing with an anointing that is directly from God. You can't act that—you've just got to pray that a similar spirit flows through you. There were definitely times when he's giving the speeches, or even just in ordinary scenes, where I felt God very close to me—it may sound a little strange, but I did feel the spirit of Dr. King close to me at times as well. And I'm only able to say that because I've never felt that in any other film. 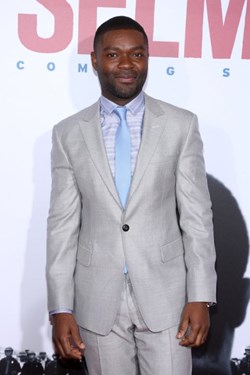 Talk to me about the difficulty of playing an eminent, and yet controversial figure like Dr. King who's revered, and also flawed.

I think what you just said is the key: yes, he's revered, but he's also flawed. The flawed part basically describes every human being walking this planet. We are the ones who project reverential attitudes toward people onto people. He didn't walk around thinking of himself as an icon. He didn't walk around thinking of himself as a historical figure. He was very aware of his fallibility. And if you're going to play him, that's the thing to focus on. Not his fallibility, but his humanity.

Why do you think American Christians, in particular, should watch Selma?

That is not only what Dr. King did ultimately (in being assassinated); it's what he did for those 13 years that he led the civil rights movement. Every day he sacrificed seeing his kids. He had to endure death threats. He had to endure ill health. He often went into the hospital for exhaustion, because he was constantly putting himself on the line for others. That's what the Bible tells us to do.

I think in seeing Dr. King in this film, you don't necessarily just see the icon, but you see the human being. And therefore hopefully you see yourself in him—and therefore, the ability for greatness in yourself. He wasn't just a talker of the word, he was a doer of the word as well.

After spending all this time with the character of Dr. King, and then considering your own vocation as an actor—how do you reconcile those two?

By doing films like Selma. I truly believe—well, I know it was a spiritual endeavor for me. Not every film I do is going to be like Selma, but every film I do can be edifying, can be something that points toward I believe to be true: I'm not one to shy away from darkness in movies, as long as there is light. As long as the light overwhelms the darkness, then you'll find me in the midst of that story. That's what I aspire to do because I know it to be true in my own life. I don't think I've done a film that doesn't demonstrate that—the darkness being overwhelmed by the light.

Was there ever a point in your life when you felt that acting became a calling for you—more than just a job or a hobby?

Yes. I think when I felt moving to America was a calling, as opposed to just a byproduct of my ambition. I had a very nice career in the UK, doing TV and theatre predominately and a bit of film. But my wife and I moving here with our two kids at the time felt very much like a calling to Hollywood. I remember praying about it and saying, “God, why would you want us to move to Hollywood? If it's a mission field, we could go to the middle of nowhere and preach to people who haven't heard the word of God.”

But I felt God say, “I have some really incredible films for you to make.” That was the moment in which I realized God is interested in using film as a tool—because of what he said to me. So I very much think of what I do as my ministry.