Hendrix is no Thomas Kinkade. Which means he gets us a lot closer to the Bible.
Interview by Katelyn BeatyOctober 20, 2015
This article is from the October 2015 issue. Subscribers can read all of CT's digital archives.

You might think it childish that every week at Grace and Peace Fellowship, a PCA church in St. Louis, John Hendrix spends the sermon drawing. Most churches do not look kindly upon adults bringing crayons and paper to the pews. But for Hendrix—a professional illustrator who has sketched every day since age 7—sketching helps to capture the strangeness of the Christian faith.

“My faith story is very similar to the way I think about my sketchbook,” Hendrix told CT. “It’s a collision of words, images, ideas, and concepts that are metaphorical or challenging.”

A St. Louis native, Hendrix never intended his in-church sketches for public viewing. Alongside teaching illustration at Washington University in St. Louis, he spends his week drawing for high-end mainstream clients. Those have included The New York Times, Vanity Fair, Sports Illustrated, children’s book authors, and In-N-Out Burger (as well as this magazine). There, it’s easy “to become a mercenary to making something that’s good or productive,” says Hendrix.

By contrast, the sketches are play—“sitting down and having fun and trying to enjoy the act of creation.” Friends began to ask him about the sketches, which are drawn in pen, then painted in watercolor at home. So Hendrix compiled the best in an online series as well as in a new book, Drawing Is Magic. The following is a selection from those sketches.

The first thing you will notice about them is that they are—well, not Thomas Kinkade. There are sea monsters and birds dressed in priestly robes and mountains with mouths. The words of Jesus are set upon the bellies of cuddly creatures. Some of the drawings are ominous; in Hendrix’s ... 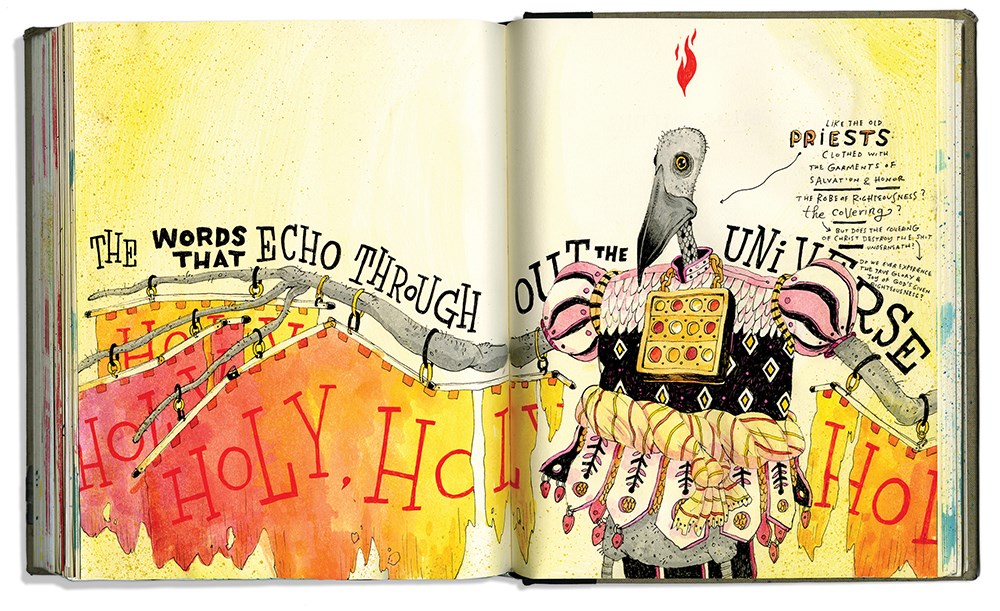