Somewhere around the middle of The Secret Life of Pets, I started jotting down the titles of animated movies about animals' secret lives. (Animals always talk in the movies about them—except, blessedly, Shaun the Sheep—and so they are, by definition, about their secret lives.) It wasn't meant to be an exhaustive list; I just jotted down the ones that occurred to me as I watched: Jungle Book, Lady and the Tramp, Finding Dory, Finding Nemo,Chicken Run, Ice Age and its descendants, Madagascar and its descendants, Zootopia. And Toy Story, and Inside Out, neither of which are about animals but might as well be. 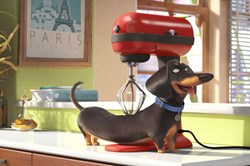 This list kept growing. That's for one clear reason: The Secret Life of Pets might as well be called Generic Animated Animal Movie, a puzzle constructed of pieces lifted from other sources. Max (Louis C.K.) is our hero, a terrier who lives with his owner Katie (Ellie Kemper) in New York City and is certain he's the luckiest pet in the world, until Katie brings home enormous furry brown rescue dog Duke (Eric Stonestreet) to be Max's “brother.” Max, as you might imagine, is unimpressed.

At this juncture I assumed this was going to be a movie for kids about accepting new siblings or something equally kids movieish. But things take a pretty sharp turn when Max and Duke get picked up by Animal Control (side note: isn't it potentially a bad idea to teach kids that Animal Control are villains?). They're sprung by a crowd of renegade “flushed pets” who live in the sewer and are led by a fluffy white rabbit named Snowball, who is voiced by Kevin Hart—which is meant to be funny but reads a tad racially awkward—and bears a suspicious resemblance to Alec Azam, the unruly white bunny in the Pixar short Presto, which ran in theaters before Wall-E. Whether or not the resemblance is accidental, I leave to your judgement, and only remind you that Snowball says he was dumped into his life of crime by a magician.

The most charming bits of the film come before and after the actual story, when we get to see various animals just going about their day. Tiny fluffy Pomeranian Gidget (Jenny Slate) yells out the window to Max all day. Chloe (Lake Bell), a very fat cat who is far too cool for everyone, tries to resist eating everything in the refrigerator. A poodle living in a posh apartment rocks out to thrash metal when his owner is gone. There's an elderly dog named Pops (Dana Carvey), strapped into one of those dog wheelchairs, who throws huge parties at his pad. Mel (Bobby Moynihan) and Buddy (Hannibal Buress) protect the neighborhood from the threat of squirrels. 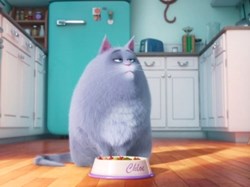 In other words, had The Secret Life of Pets managed to actually imagine our pets' secret lives in a humorous fashion, it would have been a lot of fun; every pet owner secretly wonders what their cat or dog is up to during the day. Instead it sends them off on an adventure that's some cross between Toy Story, Homeward Bound: The Incredible Journey, Lady and the Tramp, Finding Dory, and probably a half dozen other things I can't recall. Max and Duke end up, variously, in the sewers threatened by a viper, in a sausage factory (and some kind of psychedelic dream), on the Brooklyn Bridge, on an East River Big Apple Boat Tour, in the dog park, out of the dog park, in an alley with a multitudinous horde of alley cats, at parties and—this cannot possibly be a spoiler alert—eventually, at home, thanks to the help of their buddies.

At every turn, The Secret Life of Pets resembles some other movie (not least Finding Dory, which it one-ups by having no fewer than three scenes in which animals drive vehicles). That can work, for sure, if the film's central conceit is that it's self-referential, some kind of winking parody, which would have been a great tactic for this film given that the target audience’s parents have grown up seeing these movies over and over again.

That is not this movie (though it seems determined, from a short at the beginning and a joke at the end, to remind us endlessly of the studio's prime property, the Minions). There are a few jokes that are funny because they're references (there's a Some Like It Hot joke that made me laugh out loud), and there's a dog with a GoPro strapped to his head in one place (a fumbled opportunity for a whole movie, if you ask me). But it's basically just the same movie they've been making since I was a kid, except with different voice actors.

At the same time, you won't be hurt by seeing The Secret Life of Pets—though the amount of chatter about killing humans is rather startling. It's the sort of movie you leave shrugging and saying, “That was cute.” You won't feel anything at all. There are no clever catchphrases. There is no message, meaning, or moral. Nobody even makes a speech about believing in yourself or the importance of friendship, those staples of children's entertainment.

No. The Secret Life of Pets is light summer entertainment of the sort that seems invented specifically for families who've already seen Finding Dory and need to entertain kids between summer camp sessions, or who don't have A/C at home. It's pleasant enough, pretty funny in some scenes, and clever in a few. See it or skip it, and it won't matter in the slightest.

Some images of peril, including a pretty scary viper that (judging from my knowledge of various of my friends' phobias) may trigger some grown-up ophidiophobia. But the kids in the audience seemed fine. Also, the short that runs before the film—the most deeply unfunny animated short ever created—includes a naked Minion butt.

Alissa Wilkinson is Christianity Today's critic at large and an assistant professor of English and humanities at The King's College in New York City. She is co-author, with Robert Joustra, of How to Survive the Apocalypse: Zombies, Cylons, Faith, and Politics at the End of the World (Eerdmans). She tweets @alissamarie.