The origins of the candy cane.
Elesha Coffman 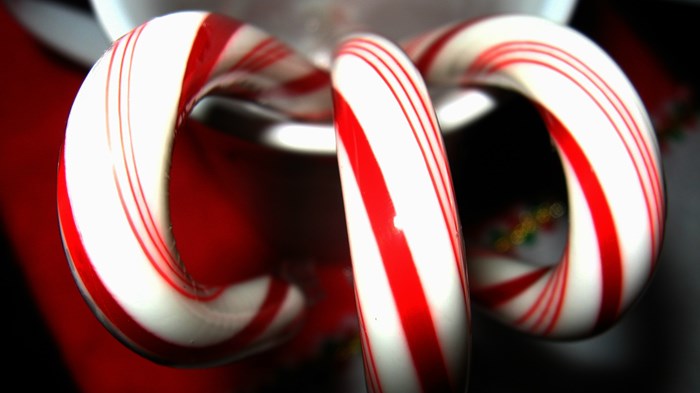 Lately we've been getting a lot of e-mails inquiring about the origins of various Christmas customs. We'll take a look at some of these legends, starting with the candy cane.

From searching the Web on "candy cane story," I learned that the confection's conception is a very hot topic among Christians. On countless homepages, as well as in several gift books, every facet of the cane's construction was attributed spiritual significance.

According to most of these sources, a faithful Indiana candymaker developed the treat as a witnessing tool. The candy is hard because God's church is founded on the rock, white because of Jesus's purity (or his virgin birth), peppermint flavored as a reference to cleansing hyssop, and curved to represent a shepherd's staff and/or the letter "J" for Jesus. Accounts vary regarding the red stripes, though they all agree that red stands for Christ's blood. Depending on which story you read, three small stripes might represent the Trinity, or small stripes could mean the stripes by which we're healed, or our small sacrifices in comparison to Christ's ultimate sacrifice (represented by a large stripe). One site even suggested that the green stripe sometimes featured reminds us that Jesus is a gift from God, though why green signifies a gift I don't know.

The motivation for candy cane apologetics can be seen in a quote from one of the sites: "Doesn't it seem strange that something we often see as unimportant and insignificant can be turned into something so vibrant, so important, simply by knowing its origin?" Of course, the same site proclaims that candy canes were originally a code between English Christians in the seventeenth ...