If the great numbers of converted people flooding into the churches had been the only result of the Second Awakening, that would have been satisfactory. But this Awakening is notable for more than that, for it had a greater impact on secular society than any other in American history through its vast social concern. For this reason it is worthwhile for Christians today to know about its influence, for they can be very pleased with what it accomplished.

There were many things wrong with the United States then, and Charles Finney, among others, became convinced that the gospel was meant by God to do more than just get people saved. It was also to clean up society, and one instrument for doing this in the 19th century was called the Benevolent Empire. This was a great network of volunteer societies organized to attack social problems.

Since the late 1820s, Finney had been moving to include social reform in his program for awakening, and he felt very seriously that converts should immediately be put to urgent work in the battle against sin. “Every member must work or quit. No honorary members” in the Kingdom of God, he wrote. During the first three decades of the 1800s, Lewis Tappan and many other influential Christian laypeople organized thousands of societies that touched every phase of American life. Slavery, temperance, vice, world peace, women’s rights, Sabbath observance, prison reform, profanity, education—all these and more had specific societies devoted to their betterment.

In the Rochester Revival of 1830–1831, Finney had first become concerned with the temperance crusade, and from then on he lent his influence to the entire spectrum of causes. By 1834 the total annual income of the “Benevolent Empire” ...

Next Article
The Time for Prayer: The Third Great Awakening 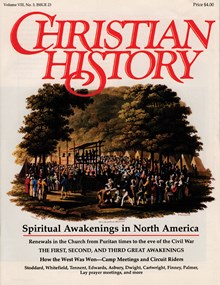