What your history textbooks may not have told you
Kevin A. Miller

The bright noon sun beat down on the stone walls of the Church of St. George in Palos, Spain. Inside, in the cool quiet, knelt Cristóbal Colón, captain general of three small ships anchored in the town’s inlet below. With Columbus saying confession and hearing mass, were some ninety pilots, seamen, and crown appointed officials. Later that day they would row to their ships, Colón taking his place on the Santa María, a slow but sturdy flagship no longer than five canoes.

The next morning, Friday, August 3, 1492, at dawn, the Santa María and its companion caravels caught the ebb tide and drifted toward the gulf. Their sails began to fill, and the crosses boldly emblazoned on them caught the light. Their mission—the wild-eyed idea of their foreigner captain—was to sail west, away from all visible landmarks. They would leave behind Spain and Portugal, the “end of the world,” and head straight into the Mare Oceanum, the Ocean Sea.

In that Ocean of Darkness, some feared, the water boiled and sea monsters gulped down sailors so foolish as to sail there. Beyond—if they lived to see it—lay the fabled island of Cipangu. There, in the land of the Great Khan, houses were roofed with gold, streets paved with marble. And this was but one of 7,448 islands Marco Polo had said were in the Sea of China. But even if they reached the Indies, how would they get back, since currents and winds all seemed to go one way?

Why Take the Risky Voyage?

Commander Cristoforo Colombo (as he was known in his hometown of Genoa, Italy) was taller than most men; so tall, in fact, he couldn’t stand inside his cabin on the Santa María. He’d had “very red” hair ... 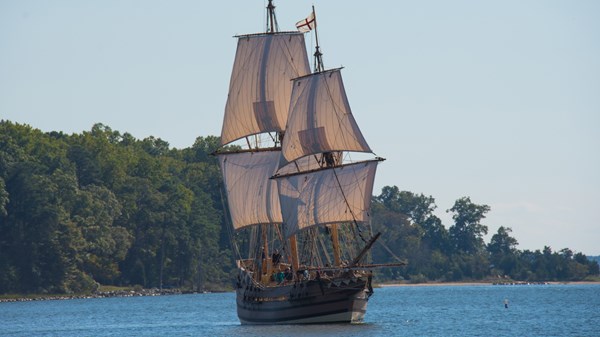