The lives and legacies of the Mathers, America's most influential Puritan family.
George W. Harper

Mather. For many, the name conjures up Bible-thumping pastors, Puritan busybodies meddling in community life, and falsely accused “witches” made to pay for their alleged misdeeds at Salem in 1692.

But these images have little to do with reality.

For almost a century, the Mathers were leading lights in the Congregational firmament of colonial Massachusetts. Indeed, from Richard Mather’s arrival in 1635, through the long, fruitful pastorate of his son Increase, to the death in 1728 of his grandson Cotton, they were a spiritual dynasty.

“His way of preaching was very plain … aiming to shoot his arrows, not over the heads, but into the hearts of his hearers. Yet so scripturally and powerfully did he preach his plain sermons, that … he saw a great success of his labours, in both Englands [Old and New], converting many souls to God.”

These are Cotton Mather’s words, penned in praise of his grandfather Richard.

Born in 1596 near Liverpool, this patriarch of Puritanism came to faith while a teenager. His conversion experience was in the classic Puritan mold: self-righteous attempts to obey God’s law, despair as he compared his feeble efforts to those of seasoned saints, and finally a breakthrough. At age 18, in the words of his grandson, “the good Spirit of God healed his broken heart, by pouring thereinto the evangelical consolations of <wa>His great and good promises.” ’

After brief study at Oxford University, in 1619 Mather was ordained an Anglican minister. In more than a decade of pastoral ministry, he upheld Calvinist orthodoxy while keeping clear of the Anglican ceremonies he and other Puritans found objectionable.

After 1630, with William Laud’s installation as Archbishop of Canterbury, theological ...

Charles E. Hambrick
Next Article
When the Sermon Reigned 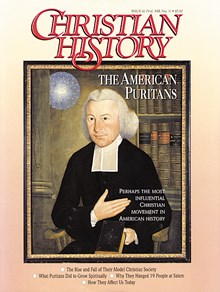