Though history has all but forgotten them, it was Christian preachers and teachers who really tamed the West.
Ferenc Morton Szasz

In 1890 William D. Bloys, a Presbyterian Army chaplain at Fort Davis, Texas, began a regular outdoor service in a pasture 19 miles from the fort. Officially the "Bloys Camp Meeting," his motley gathering of cowboys and ranchers became known as the "Spiritual Hitchin' Post of West Texas." Bloys never tried to force a man to accept a faith he didn't feel he needed, but many men in that wild country did accept—and cleaned up their lives. One observer remarked, "No boy raised up at Bloys ever ended in the Jeff Davis County Jail."

Though such signs of spiritual life appeared all over the western landscape, they are completely absent from most people's visions of the nineteenth-century American frontier. Names like Buffalo Bill, Sitting Bull, Annie Oakley, Calamity Jane, Billy the Kid, and Wyatt Earp are almost synonymous with the West, while names like William D. Bloys, Daniel S. Tuttle, Charles Sheldon, Sheldon Jackson, and Brother Van Orsdel ring few bells. Yet if one looks at actual accomplishments, the situation might well be reversed. Most western communities owe far more to these unheralded clerics than they do to the high-profile outlaws or icons.

From about 1840 to the end of the century, these largely anonymous ministers shaped the contours of western life in three major ways. They formed the first churches and Sunday schools, which promoted social stability while reining in local violence; they developed a distinctly western style of Christianity that emphasized a non-denominational message of salvation and personal ethics; and they helped lay the institutional foundations—orphanages, hospitals, and schools—for scores of western communities.

The American West of the Civil War era was full of violence. In ...

Mark Galli
Next Article
A Church of Their Own 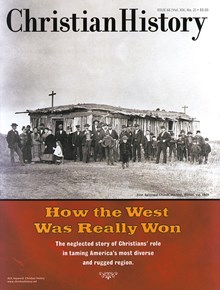