From the way Oxford scorned the Holy Club, you would think the Wesleys had created a monster.
Elesha Coffman

As a college student, Charles Wesley remarked, "Christ Church is certainly the worst place in the world to begin a reformation; a man stands a very fair chance of being laughed out of his religion at his first setting out, in a place where 'tis scandalous to have any at all." Yet this wealthy and well-connected Oxford college was the birthplace of the Wesleys' new "method" of living.

Eighteenth-century Oxford should have been a good venue for religious training. It existed primarily to prepare young men for ministry in the Church of England, and some 70 percent of its graduates eventually took orders.

Few of these men, however, felt "called" to ministry. Most, like the Wesley brothers, came from middle- to lower-class families and had few job prospects outside the church. The Wesleys, raised by a pastor, held ministry in higher regard than did most of their peers, though even they originally hoped to use Oxford connections to attain comfortable posts.

In general neither Oxford students nor faculty expressed much interest in godliness—or, according to numerous critics, in scholarship. Oxford was known throughout Europe as a party school, where students and dons alike devoted most of their energies to drinking, gaming, and idle talk.

In a satirical magazine launched in 1721, the school's self-appointed jester sneered, "I have known a profligate debauchee chosen professor of moral philosophy; and a fellow, who never look'd upon the stars soberly in his life, professor of astronomy … and, not long ago, a famous gamester and stock-jobber was elected professor of divinity; so great, it seems, is the analogy between dusting of cushions, and shaking of elbows; or between squandering away of estates, and saving of souls!"

Charles Wallace, Jr.
Next Article
The Wesleys: From the Editors - Innovating with the Flow 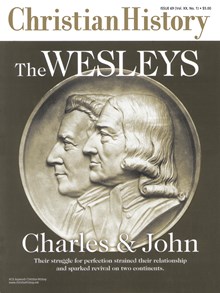