Preaching in his sleep

Allen's desire to preach had come with his conversion in his late teens. "I was constrained to go from house to house, exhorting my old companions and telling to all around what a dear Savior I had found," he wrote in his autobiography. But he was still enslaved. "Slavery is a bitter pill, notwithstanding we had a good master." Fortunately, he wrote, "a door was opened up unexpectedly for me to buy my time and enjoy my liberty."

Joining a Methodist class meeting, Allen convinced white circuit rider Freeborn Garrettson to preach at his unconverted master's house. Like Allen's owner, Stokeley Sturgis, the New Yorker Garrettson had been a slaveholder until his own conversion four years earlier led him to free his chattels. Garrettson's sermon from the Book of Daniel—"Thou art weighed in the balance, and art found wanting"—convicted Sturgis. Within two months, he contracted to grant Allen and his brother their freedom upon payment of 60£, or $2000 continental money.

By August 1783, at age 23, Allen was a free man with one desire: to proclaim the gospel. "Sometimes I would awake from my sleep, preaching and praying," he recalled. Such ministry cost money, which he earned by cutting wood, making shoes, and other odd jobs. "My usual method was, when I would get bare of clothes, to stop travelling and go to work," he said.

When the Revolutionary War ended, he was licensed as a preacher with the Methodist Episcopal Church (MEC). Not quite a circuit rider, he was more a circuit walker, who traveled until his feet became so "sore and blistered … that I scarcely could bear them to the ground." He went first to Delaware, then into New Jersey, Pennsylvania, and Maryland, and perhaps as far south as Virginia and the Carolinas. He was even invited by Bishop Francis Asbury to travel regularly with him in the slave states, though Allen declined for a variety of reasons.

In February 1786, Allen came to Philadelphia to preach at the 5 a.m. service at St. George's Methodist Episcopal Church. He intended to stay only a week or two in the new nation's capital. It became his base for the rest of his life.

"You must not kneel here."

Allen's first preaching mission in Philadelphia, "seeking and instructing my African brethren, who had been a long forgotten people," as he put it, "was much blessed." He attracted 42 members to form a Methodist society and began to consider "erecting a place of worship for the colored people."

Immediately he ran into opposition, both from "the most respectable people of color" and then from the white elders of the city's MEC. Biding his time, Allen continued to keep together his African-American recruits to Methodism by holding prayer and exhortation meetings. But even that provoked conflict with the clergy at St. George's.

An alternative emerged with the formation of The Free African Society (FAS) of Philadelphia, which provided religious services. When its worship became too Quaker in style, Allen left the society. Still, when the group decided to build an African church, Allen endorsed the project, provoking further complaints from the white Methodists.

His loyalty to Methodism was not reciprocated, particularly at St. George's. The construction of a gallery at the church forced a shift in the seating pattern for "the colored people." Allen, William White, and Absalom Jones figured they would sit in the seats above those they had used before. As the service began, they knelt in prayer, only to have Jones pulled up by one of the trustees.

"You must get up—you must not kneel here," the trustee demanded.

Jones asked him to wait until after prayer.

"No you must get up now, or I will call for aid and force you away," he repeated.

When Jones again requested he wait until after prayer, another trustee came, and the two began to pull White and Jones off their knees just as the prayer ended.

"We all went out of the church in a body," Allen recounted, "and they were no more plagued with us in the church."

Allen's party refused to return, and instead publicly supported the African Church project. Elder John McClaskey threatened the group with expulsion. The FAS membership, largely fed up with Methodism, chose to align with the Protestant Episcopal denomination, with Jones as the rector of the African Episcopal Church of St. Thomas.

Allen refused to sever his ties to Methodism: "I was confident that there was no religious sect or denomination [that] would suit the capacity of the colored people as well as the Methodist." But he was adamant about not going back to St. George's Church where his people "were considered as a nuisance."

In May 1794, he and ten other black Methodists agreed to open "a house to meet in for religious worship … separate from our white brethren." He bought the frame of a blacksmith shop, moved it to his lot, and refurbished it in time for Bishop Asbury to preach the dedicatory sermon on June 29, 1794, for Bethel African Methodist Episcopal Church.

Five years later, after many arguments over whether or not the Philadelphia MEC conference owned the Bethel property, Asbury ordained Allen a local deacon. The ordination recognized Allen's impressive pastoral gifts, but not fully. Technically he remained under the supervision of the white elders and was not permitted to administer the Lord's Supper, nor could he marry or baptize beyond Bethel Church. The MEC's General Conference confirmed Asbury's action, but its delegates considered the innovation too controversial to announce in its Book of Discipline.

Allen's limited ministerial authority did not detract from Bethel's growth, his own livelihood, or his public reputation in Philadelphia. Bethel's membership grew from 32 to more than 700 in eleven years. In 1801 he published two editions of A Collection of Spiritual Songs and Hymns, which reappeared in a pocket sized version in 1808.

He was active in the Pennsylvania Abolition Society's efforts to help newly freed African Americans find apprenticeships, and he often assisted in reclaiming blacks from slave-catchers. (Allen himself was once arrested as a fugitive slave, but he sued the claimants, forcing the slaveholder into debtors' prison for three months.) In 1799 he signed Jones's petition to Congress calling for the abolition of slavery and the slave trade. The same year, Allen's funeral sermon praising the late George Washington for releasing his slaves in his will earned public notice.

Relations with the MEC were stable until 1805, when James Smith became elder at St. George's. A new dispute arose over his powers, especially in cases of congregational discipline at Bethel. Smith demanded the Bethel keys and church records, threatening expulsion of the congregation. Allen and his trustees immediately went into action, distancing themselves from the denominational hierarchy.

"Our only design," Allen claimed in a letter of explanation, "is to secure to ourselves our rights and privileges, to regulate our affairs, temporal and spiritual, the same as if we were white people."

Contests around disciplinary controversies, lawsuits, and threats continued for a decade. The last stage of separation was at hand. The final act of the drama was on New Year's Eve, 1815.

Using an excommunicated member of Bethel as his ostensible host, white elder Robert Burch announced he would take charge of Bethel's pulpit. Allen's members responded by standing in the aisles, physically blocking Burch's access. When Burch petitioned the state Supreme Court to regain control, the judges rejected his claim and granted independence to Allen's congregation.

The organizing general conference of the AME denomination convened in Philadelphia, where Allen was ordained elder, then consecrated as bishop. He remained the senior pastor of "Mother Bethel" while superintending the denomination.

As Allen aligned himself and the denomination with other African Methodists who had taken steps toward independence, his reach extended beyond the city of Philadelphia. Numerical growth and territorial expansion were slow, but the church moved west, and into Canada and Haiti. When the "Gallery Incident" was related at the General Antislavery Convention in London in 1843, 12 years after his death, Allen's legacy extended to an international audience.

His autobiography, published posthumously, ended with a hymn that speaks of his legacy, Bethel Church:

Bethel surrounded by her foes,
But not yet in despair,
Christ heard her supplicating cries;
The God of Bethel heard.

Will Gravely is professor of religious studies at the University of Denver, and author of Gilbert Haven: Methodist Abolitionist (Abingdon, 1973).

Gravely's Gilbert Haven, Methodist Abolitionist; A Study in Race, Religion, and Reform, 1850-1880 is available through Amazon.com.

For more on the AME church's history and what it has done more recently, see James T. Campbell's Songs of Zion: The African Methodist Episcopal Church in the United States and South Africa.

Mother Bethel AME Church has its own web site, including a virtual tour of the church and its history.

The AME's 1840 conference resolutions, including those regarding slavery, is available online.

The Library of Congress's wonderful exhibition Religion and the New Republic has a section on "The Emergence of the African-American Church" (you'll have to scroll down a bit to get to it), including images regarding the founding of the AME church.

PBS Online's Africans in America is by far the best online resource about African Americans before the Civil War. It includes articles about Allen, his Autobiography, and the larger story of the independent black church.

Richard Allen (center) and other early leaders of the African Methodist Episcopal Church. Image from the Library of Congress. Used by permission. 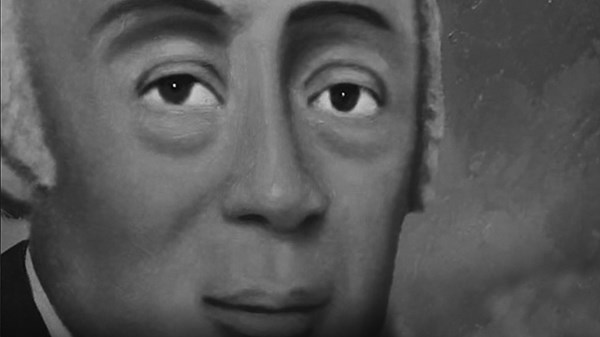