It is not much of an exaggeration to say that women made revivalistic Protestantism happen in the nineteenth century. For example, as historian Mary Ryan has shown, Charles Finney's New York revival meetings were organized, prepared, and prayed for by an extensive network of Christian women. Moreover, these women often brought the men in their lives—husbands, fathers, sons, and more distant relatives—to Finney's meetings.

Women's influence soon reached far beyond the prayer meeting and the revival, especially through their participation in social causes. It was in the crusades for educational reform, abolition, and temperance that three of nineteenth-century America's most prominent Christian women made their names and changed their nation: Catharine Beecher, Sojourner Truth, and Frances Willard.

The oldest of eight surviving children of the influential Connecticut minister and social reformer Lyman Beecher (1775-1863) and his wife, Roxana, Catharine Esther Beecher was trained from girlhood in the custodianship of her nation. At 16, her mother died and she took on the mothering role for her younger siblings—a training ground for her later influence as a founder of schools and trainer of teachers.

A woman described by one historian as "plain of appearance, with heavy features, dark hair worn in lank ringlets, and a sallow complexion," Beecher was frail, suffering "recurrent nervous collapses and attacks of sciatica," which slowed but never stopped her indefatigable reforming efforts. But she had no time for the "weaker sex" philosophy that assumed women were less capable of learning and leading than men.

Steven Gertz
Next Article
Story Behind 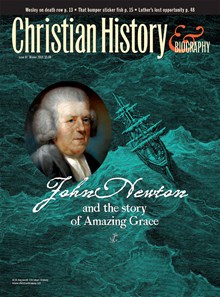