Home > 2018 > June
Christian UnityJune 08, 2018
Why "Get The Right People On The Bus" Doesn't Always Work For A Small Church Staff
People are not on the bus to get you to your destination; they are the destination. People worshipping Jesus and sharing His love with others.
Karl Vaters
Read as Single PagePage 1 of 2 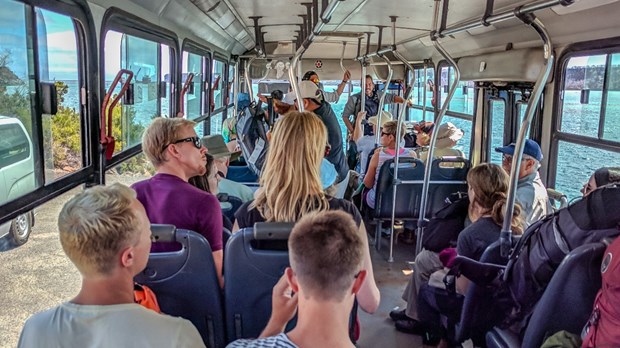 One of the biggest frustrations faced by small church pastors is a lack of resources, including so-called human resources. “If only I had more money, a better building, more people or the right people” we complain, “then we could really get something done at our church.”

There are so many problems with that mindset, starting with the idea that there are “right” and “wrong” people.

In God’s eyes there are no “right” people or “wrong” people, and there shouldn’t be in our eyes, either.

In God’s eyes there are no “right” people or “wrong” people, and there shouldn’t be in our eyes, either.

To address this issue, here’s an excerpt from my new book, Small Church Essentials, chapter 5, “Why Is My Church So Weird?”

Sometimes It Takes The Wrong People To Change The World

There’s a great scene in the movie Apollo 13 in which the engineers are trying to figure out how to get the crippled spacecraft and its three astronauts back to earth safely.

They’ve just discovered that the air filtration system is overtaxed, causing the carbon dioxide levels to rise dangerously high. If it’s not fixed soon, the astronauts will be poisoned by their own breath. But, because parts of the ship have been damaged and abandoned, the remaining filters are square, but the holes are round.

One of the engineers takes a box of material, dumps it on a table, and tells the others, “We gotta find a way to make this [he holds up a square filter] fit into the hole designed for this [he holds up a round filter] using nothing but that [points to the material on the table].”

There’s no sense complaining about wanting something they don’t have. No amount of planning, effort, or faith is going to put an item on Apollo 13 that isn’t already there. They have to use what is on the ship—and now on the table in front of them—to get the job done.

Putting a square peg into a round hole and using only what’s on the table with lives at stake. That scene may be the perfect analogy for how leadership works in the small church.

Working With These People On This Bus

“Get the right people on the bus” has been one of the most popular sayings in church leadership circles over the last few years. It comes from Jim Collins and his hugely influential book, Good to Great.

The idea is that when you’re selling a service or a product you need to start with people who have the right mix of skills, emotional balance, relational IQ, and so on. Otherwise, you’ll spend all your time infighting instead of producing goods or services and making money.